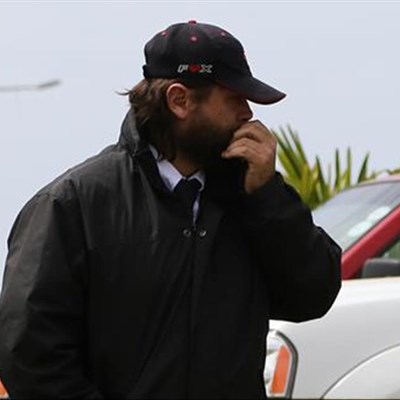 Trying to hide his face before facing his sentencing, Beale arrives for his court case on Tuesday, 1 November.

GARDEN ROUTE NEWS - Cheers of elation echoed through the Thembalethu Regional Court on Tuesday when, after almost three years, the Plettenberg Bay man who pleaded guilty to almost 19 000 charges of child pornography possession, was sentenced to 15 years behind bars.

This is believed to be the harshest sentence ever handed down in a possession of child pornography case in South Africa, and also involved the highest number of images.

William Beale (39) was further sentenced a R500 fine or 30 days in prison for the possession of dagga after police found a small amount during his high-profile arrest in January 2015.

Beale, a computer engineer, was the first South African to have been arrested as part of a joint effort by South African and Belgian police cracking down on an international child pornography ring.

Following his arrest at his seaside home in Plett, police found thousands of images and videos of children being tortured, raped and even murdered on his computer.

He was initially charged with just short of 180 000 counts of possession of child pornography, but during a plea agreement in February this year, he pleaded guilty to only 18 644. William Beale caught on camera before entering the Thembalethu court on 1 November.

Beale was tracked down following the arrest of an alleged paedophile in Belgium in October 2014.

During sentencing, magistrate Eugenia Jacobs said it was important to highlight the seriousness of Beale’s crimes.

She added that the images involved depicted the most horrific acts imaginable on children – some babies were so small that they have not even learnt to walk yet.

She added that while taking into account all sentence options, she came to the realisation that a noncustodial sentence would be a total disregard of the gravity of the crime.

Jacobs further said that in the past, courts dealt with child pornography possession relatively lightly but in recent years have come to realise the seriousness of the crimes and have opted for stricter sentences.

“This sentence should send a clear message to the public that these crimes are unacceptable and will not be tolerated. Imprisonment will deter the accused from repeating similar crimes and also deter others from committing such offences,” Jacobs said.

“If the courts and the community are not the voices for the voiceless, who will be?” she posed. The magistrate also said that there were several aggravating factors taken into consideration during sentencing, including the vast number of images and the fact that Beale had accessed the “dark web” to find the images.

The fact that he did not commit a contact crime was irrelevant, Jacobs added, as with each “click of a button” a child’s rights had been infringed.

Read a related article: 'Speaking out for the children'