'Speaking out for the children' 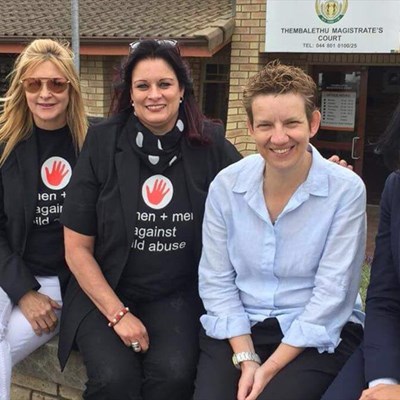 These women have been crusading for the "voiceless victims" of child pornography in the Beale case since his arrest almost three years ago. From left: Miranda Jordan-Friedmann, Joanne Barrett, Sergeant Delene Grobler-Koonin and Lieutenant Colonel Heila Niemand. Photo: Yolandé Stander

GARDEN ROUTE NEWS - There was an overwhelming sense of relief among those in the Thembalethu Regional Court gallery when William Beale was sentenced to 15 years in prison for possession of child pornography.

Among those present during the court proceedings on Tuesday 7 November were anti-child abuse groups, the investigating officer and head of the family violence, child protection and sexual offences (FCS) unit in Gauteng.

This is what they had to say:

Lieutenant-Colonel Heila Niemand, Gauteng FCS unit:
"Being in court today and hearing the magistrate mention that we are the voices for these young victims and to actually hear that a 15-year direct imprisonment was handed down, made our jobs a little easier.

Now we know there is a message to South Africans and the world that the police, the justice department and the NGOs are not going to tolerate any predator who sits down to view and download images of child abuse in the country," Niemand said.

About having to view the images of child sexual abuse and murder during the investigation, Niemand said that to distance herself from the horrors, she treated each one as being the voice for the children who cannot be heard.

She said when she first received a call from Belgian police informing her that there was a suspect in South Africa viewing these images, she felt like "jumping out of her chair to find the guy" immediately.

Women and Men Against Child Abuse (WMACA) director Miranda Jordan-Friedman:
"We are extremely pleased with the outcome. One of the most important points that the magistrate mentioned was that this sentence sends a very strong message that this was not a victimless crime."

She added that despite the fact that he was not "hands on", he still viewed images of children being abused. "In each image a child had been sexually abused," Jordan-Friedmann said.

She also welcomed the sentence and said it was the harshest sentence for possession of child pornography ever handed down in South Africa.

"In the past we have seen higher sentences given for creation and distribution of child pornography, here we saw an extremely hard sentence being given for possession of those images." William Beale has been sentenced to 15 years in jail for distributing child pornography.

Janet Harding, anti-child abuse group Green Hearts:
"It sends out a clear message to purveyors and viewers of child pornography that this will no longer be tolerated," Harding said, adding that the courts and communities have to be the voice of the most vulnerable members of society who cannot speak for themselves.

She also said that each time an image is viewed, a child has suffered abuse and degradation. "The sentence of 15 years' incarceration is befitting of the crimes committed."

WMACA Western Cape spokesperson and Plettenberg Bay local Joanne Barrett:
"We are very happy with the sentence. We are also happy that the voices of those victims, those babies who cannot speak, had been heard," Barrett said.

It was a massive victory not only in this particular case, she said, but in any child pornography case going forward.

"It sends out a very strong message."