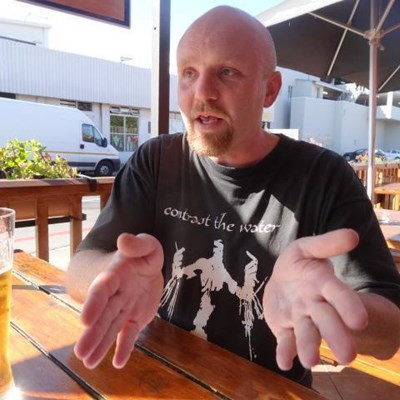 Mike Hampton.
KNYSNA NEWS - The Parliamentary select committee on petitions and executive undertakings on Wednesday, February 10 listened to a petition of alleged maladministration and financial irregularities against Knysna municipality, submitted by Mike Hampton, a Knysna community activist.
Temba Gubula of Parliamentary communication services in a press release said the committee resolved to investigate the matter further in order to arrive at a sound determination. Gubula's press release reads as follows:
"The select committee on petitions and executive undertakings, after having listened to a petition of maladministration and financial irregularities against Knysna municipality which was submitted by Mr Mike Hampton, has resolved to investigate the matter further in order to arrive at a sound determination.
"Mr Hampton is a community activist from the Knysna area, who is complaining about the alleged irregular funding of Knysna Tourism with taxpayers’ money; the alleged illegal tendering of the integrated strategic development framework (ISDF) for Knysna to a company that had not scored the highest points and is headed by a local property developer. His petition also alleges an illegal appointment of a municipal manager and the irregularities resulting from his appointment.
"The petitioner also claims unconstitutional blocking of his emails by the municipality. In addition, he alleges that his efforts seeking intervention from the Western Cape Provincial Government were in vain. He also claims that the local media has been barred from carrying his articles, but the same media would write stories about him and not give him an opportunity to respond. He attributes this to the community media not wanting to lose revenue as they depend on municipal advertising.
"Representatives of the provincial government - from local government and finance - were present to respond to matters in their purview. Provincial finance department conceded to being aware of the ISDF tender investigation of 2014, but said it was still ongoing thus could not pronounce on the findings. Both provincial representatives were mum on allegations of unlawful appointment of the municipal manager and other matters contained in the petition.
The committee resolved to give them until February 19, 2016 to furnish it with substantive responses as the ones provided lacked detailed information.
"The committee also expressed its displeasure at the absence of the Knysna municipality which happens to be a critical player in the matter, but the committee said it would not hesitate to use constitutional provisions available at its disposal to ensure that this did not recur and that this matter is put to rest."
Click here for related articles: