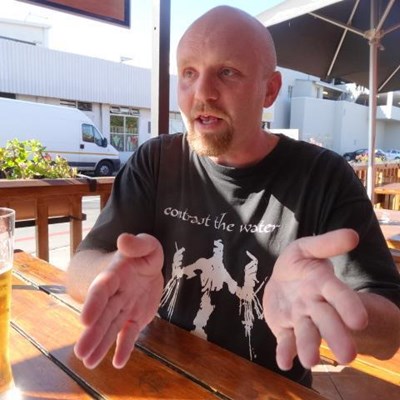 Mike Hampton.
KNYSNA NEWS - The well-known Knysna blogger, Mike Hampton lost another court case. On July 29, Magistrate Goosen gave judgement in Magdalena Moos' application for a protection order against Hampton in terms of the Protection from Harassment Act.
Moos is currently the provincial chairperson of the Community Police Forum (CPF) and also serves on the national CPF board.
The court found on a balance of probabilities that Hampton has engaged or is engaging in harassment and a final protection order was granted, as well as a warrant for his arrest should he contravene the order.
On July 7, Justice J Allie sentenced Hampton to 60 days imprisonment for contempt of court, suspended for three years on condition he does not publish defamatory statements or photographs of Knysna's deputy mayor, Esmé Edge.
The contempt charge follows after Hampton was found in contempt of a court order for posting a blog on April 24 in deliberate disregard of the court order granted on December 9, 2014. The high court application was brought by Edge against Hampton.
In terms of the order following Moos' application, Hampton is prohibited from engaging in the harassment of Moos, either by himself or by others at his behest. In addition thereto he may not publish in any form or in any way disseminate any picture of her, any defamatory statements and any personal information of the applicant. He also may not speak to or make contact with the applicant.
Goosen ordered Hampton to remove the posts produced on September 22, 2014, August 8, 2014 and June 13, 2014 and to remove the name Magda Moos from the header of the blog posted on February 25, 2014 on the websites Knysna Keep and Love Knysna.

Mike Hampton's blog, Knysna Keep
The Moos application was submitted by defence team Carl Jeppe and Advocate Julie Seton.
On Tuesday, August 11 Moos told the Knysna-Plett Herald that the judgement was a special victory for her, especially since August is Women's Month. She said she valued the justice system, especially after the protection order was granted.
"I just decided that I was born in Knysna, went to school here and built up a good name for myself in town. I will not be the victim of incriminating posts by a blogger."
By time of going to press, Hampton had not replied to a request on Monday, August 10 for his side of the story or comment on the judgement.
Read related articles below:
ARTICLE: CHRISTO VERMAAK, KNYSNA-PLETT HERALD NEWS EDITOR
'We bring you the latest Knysna, Garden Route news'
Posted on: 10:00 Thu, 13 August 2015
Your Comments