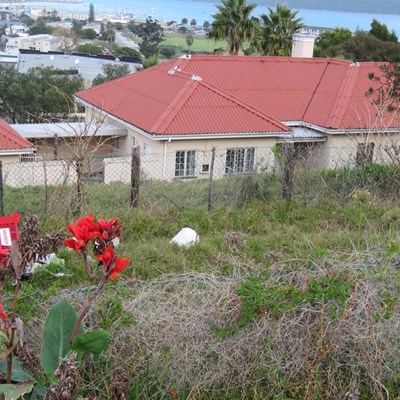 This photo taken on Monday, May 23, shows that since this house was first exposed as being trashed and inhabited by vagrants, nothing has been done to clear it. The broken trolley with rubbish around it still lies in front of the garage and there are no signs of improvement.
KNYSNA NEWS - Following last week's story about two houses in Knysna that are totally trashed, inhabited by vagrants and possible drug addicts, and in general a scourge on the town, correspondence flows between the municipality and the State, but little else has transpired.
When Knysna municipal manger Grant Easton was contacted last week about the house in Agnar Street (erf 460) as well as a house in Mount Joy Road, Upper Central (erf 3408), Easton explained that these properties were owned by the Department of Public Works.
The one home had been used by the Department of Justice and magistrates lived there, and most recently a public prosecutor, who left Knysna in 2011. Since then this house has become home to vagrants.
It is not clear who lived in the other property in Upper Central or when this house became empty, but since then it has also been trashed.
Easton committed himself to contacting the relevant government departments and to take immediate action.
This week when the Knyna-Plett Herald went back through various documents, it becomes clear that what even Easton calls a "dire situation … and disgusting mess", has been brought to the attention of the director general of Public Works and this department many times, by more than one municipal manager and other politicians.
Even the mayor has been copied on this problem more than once.
In 2014 then municipal manager Lauren Waring consulted with the fire department and wrote to the Department of Public Works. In this letter she said the neglected condition of the property in Agnar Street was an embarrassment to residents in the area.
It would seem that in 2014 there was a dispute over the price of garden services to clear the outside of the "magistrate's house" in Agnar Street after the fire department and Waring warned the the relevant government department, "the property is extremely overgrown … and is therefore not in compliance with the provision of the Fire Brigade Services Act (Act 99 of 1987) as well as the bylaws relating to community fire safety".
Waring's instructions were to have the property cleared within 21 days and all the waste was to be removed, not burnt on the site.
This clearly did not happen.
In some correspondence in 2013 in response to Waring's requests the Department of Public Works said the property was handed over to Correctional Services on July 25, 2015.
According to this response a call was logged for clearing of the garden, which was done. Security was also appointed to be on-site as the house has to be renovated before Correctional Services could occupy it.
Obviously this did not come to fruition either.
Since correspondence from Waring in 2013 to the Department of Public Works, saying the house had been empty for a year, was infested with vermin, had been broken into and was being used by vagrants and drug users, all municipal attempts (Knysna and Eden district municipalities) to get the government department to take ownership of the problem, nothing has been done.
This is despite the fact that this situation has worsened over the years, even though the house has heritage value as it is more than 60 years old.
At the time of going to press, despite having contacted the head of the Deputy Minister of Public Works, Deon Viljoen, no comment had been received about their plans to address this situation.
The other house in Knysna which has been all but destroyed is in Mount Joy Road, Upper Central. Thick bushes obstruct the driveway and paths.
Click here for previous articles: