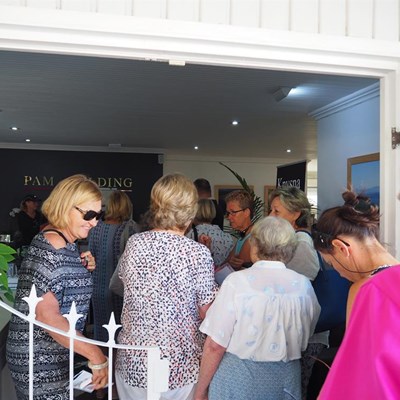 There was great excitement at the Pam Golding offices in Gray Street when Knysna Literary Festival tickets went on sale on February 1.
KNYSNA NEWS - It is the eighth year that the Knysna Literary Festival is to return and this year ticket sales have shown that the event gets more popular every year.
Sales opened on February 1 at the Pam Golding offices in Gray Street, and people were queuing from as early as 6:30, although tickets sales only opened at 7:30.
Champagne was popped and the atmosphere was one of excitement as the Literary Festival tickets were snapped up for the event to be held from March 16 to 19.
Festival manager Sasha Campbell said the turnout was fantastic. "It was great to see the early-morning queue, but also a steady stream of people buying tickets all day, which means everybody got a ticket for the specific talk they wanted to attend," said Campbell.
She was surprised to see so many foreigners, she said, with English, German, Dutch, Swedish and Swiss nationals also snapping up tickets.
There was also the usual great response from locals, for whom this festival is an annual treat, not to be missed. Some 40 cappuccino coffees with croissants were also served by Café Throbb to those queuing.
Campbell said tickets to Fate of the Nation (200 were available) were sold out as were the 100 tickets to The Delicious Word Journey.
A Romp through South Africa's Momentous History by Rob Caskie was also very popular, she said, as was the demand for the Look 'n Cook with Sarah Graham.
Founder of the festival Ling Dobson said, "This year the line-up of authors/speakers is just awesome. When somebody like Helen Zille subscribes to the essence of this festival, it is not only a great compliment, but also very humbling. I am blown away so far."
Tickets are still available for other great talks by authors such as Richard Steyn who wrote about Jan Smuts, Ahmed Kathrada (Conversations with a Gentle Soul) and his co-author Sahm Venter.
The Echo of a Noise by Pieter-Dirk Uys is also proving to be very popular.
* Buy tickets at the Pam Golding offices at 5 Gray Street, Knysna, or online at www.webtickets.co.za.
A queue for this year's 2017 Knysna Literary Festival was longer than ever. Photo: Supplied
'We bring you the latest Knysna, Garden Route news'
Posted on: 08:03 Wed, 08 February 2017
Your Comments