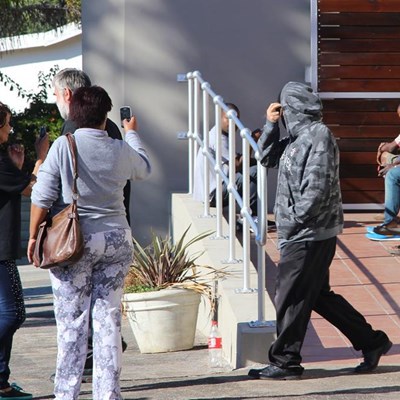 The Plettenberg Bay computer engineer accused of having links to a horrific international baby pornography network leaves court at an earlier court appearance. Photo: Yolande Stander
PLETTENBERG BAY NEWS - The plea negotiations process in the matter involving a Plettenberg Bay man accused of having links to an international baby pornography network, have started again after the man’s plea bargain was rejected in September last year.
The 38-year-old computer engineer, who cannot be named until he has pleaded, briefly appeared in the Knysna Regional court on Tuesday, February 7 for the first time since the charge sheet in the matter had been completed recently.
The formulation of the charge sheet has been a contentious issue in recent months after the office of the Director of Public Prosecutions (DPP) indicated that it wanted the man to be charged on each of the 179 000 images in question and that each image had to be described in the charge sheet.
The man was arrested by police after Belgium and South African authorities swooped on his seaside home on January 13, 2015 and allegedly found sections of files containing images and videos of violent assaults as well as internet addresses of more than 300 other alleged paedophiles.
Last year the man submitted a plea bargain after months of negotiations, but this was rejected by the DPP in September. Among the reasons was the number of images in question. Initially there were 179 000, but his lawyer argued that there were duplications and that there were consequently just more than 50 000.
The charge sheet, however, now includes all the original images.
The matter was postponed to February 20 for a plea bargain to be sent to the DPP's office for a decision.
Click here for previous articles: