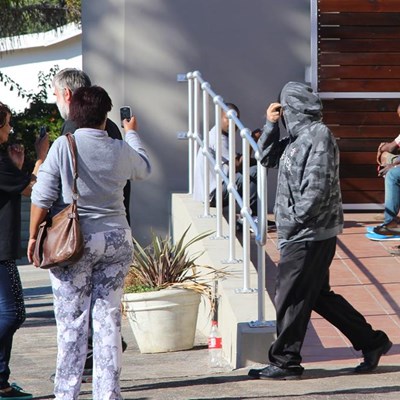 The Plettenberg Bay computer engineer accused of having links to a horrific international baby pornography network leaves court at an earlier court appearance. Photo: Yolande Stander
PLETTENBERG BAY NEWS FLASH - The case against the Plettenberg Bay man accused of having links to a horrific international baby pornography network was postponed yet again today.
The matter was scheduled to get underway in the Knysna Regional Court after progress with formulating the charge sheet had been made, but the accused did not take his place in the dock.
His lawyer Carl Jeppe indicated that the man was ill.
The matter was postponed to February 7.
The 38-year-old accused, a Plettenberg Bay computer engineer who cannot be named until he has pleaded, was the first South African to have been arrested as part of Cloud 9 – cooperation between South African and Belgian police responsible for cracking down on a child pornography ring linked to a cyber meeting space for paedophiles whose fetishes seem to be the sexual abuse of babies. Some of the images found included the torture and murder of babies as young as only a few days old.
The Plett man was arrested on January 13, 2015 when international police raided his seaside home and allegedly found sections of files containing thousands of images and videos of violent assaults as well as internet addresses of more than 300 other alleged paedophiles.
More in next week's Knysna-Plett Herald and online.
Click here for previous articles: