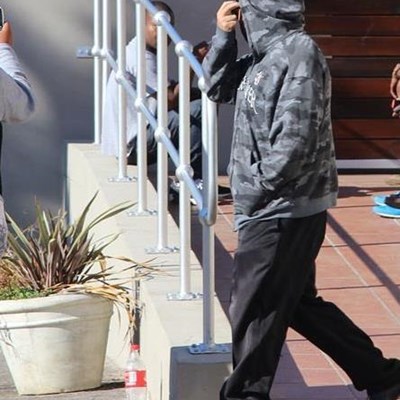 The Plettenberg Bay computer engineer accused of having links to an international child pornography network leaves the Plettenberg Bay Magistrate's Court during an earlier appearance. Photo: Yolande Stander
PLETTENBERG BAY NEWS FLASH - Children’s rights activists were hot under the collar this week when it came to light that the matter involving a Plett local accused of having links to a baby pornography network was at risk of being struck off the roll due to delays with the formulation of the charge sheet.
“This is just another example of the justice system failing child victims,” local anti-child abuse group Green Hearts spokesperson Helen Bezuidenhout said.
The 38-year-old Plettenberg Bay-based computer engineer, who cannot be named until he has pleaded, briefly appeared in the Knysna Regional Court on Monday, October 17, after the matter was postponed last month for the finalisation of the charge sheet.
But instead, prosecutor Chamelle Bastian informed the court that she had received instruction from the office of the Director of Public Prosecution (DPP) that the man would be individually charged for each of the 179 000 images relating to the case and that each image would have to be described in the charge sheet. She then asked for the matter to be postponed, indicating that the formulation process would take two to three months.
The suspect’s lawyer Carl Jeppe, however, objected to the postponement, claiming that the state had ample time to prepare the charge sheet, and therefore asked the court to have the matter struck from the roll.
He further said that he had been actively trying since June this year to obtain the charge sheet, to no avail.
Jeppe added that the massive task of individually describing each image would take much longer than just three months and then putting each count to his client would take even longer. “We will still be busy come Christmas next year.”
Click here for previous articles:
Read more in tomorrow's Knysna-Plett Herald, and online.
ARTICLE: YOLANDé STANDER, KNYSNA-PLETT HERALD CORRESPONDENT
'We bring you the latest Knysna, Garden Route news'
Posted on: 14:09 Wed, 19 October 2016
Your Comments

88 %
No: It is the municipality's job to keep Knysna clean.