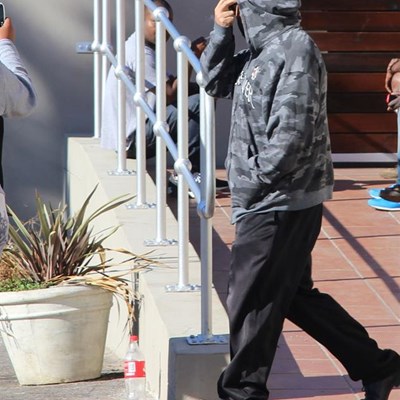 The Plettenberg Bay computer engineer accused of having links to a horrific international child pornography network leaves the Plettenberg Bay Magistrate's Court during an earlier appearance. Photo: Yolande Stander
PLETTENBERG BAY NEWS FLASH - A plea bargain submitted by a Plettenberg Bay man accused of having links to a horrific international pornography – involving the rape and torture of babies – has been rejected by the Director of Public Prosecution (DPP).
The 38-year-old computer engineer, who cannot be named until he has pleaded, appeared in the Knysna Regional Court on Monday, September 19.
The matter – which has been dragging on since January last year - was placed on the court roll for plea and sentencing proceedings to get underway, but was however brought to a halt following several issues including uncertainty over the charge sheet.
Click here for previous articles:
Read the latest here.
'We bring you the latest Plettenberg Bay, Garden Route news'
Posted on: 16:18 Mon, 19 September 2016
Your Comments


I'm a 40 year old woman looking to meet men and women between the ages of 39 and 50.
View Profile