'Horror houses’ still a blight on the town 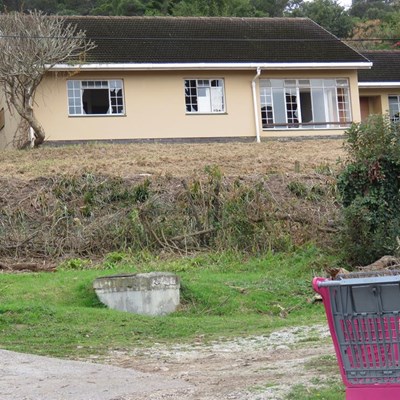 A view of the house with a trolley parked in front of it. Before the municipality cleared the plot of land it is on, the house was barely visible from the road because of overgrown bush. However clearing the property and boarding this house has not worked as is evident from all the broken windows.

KNYSNA NEWS FLASH - Two Knysna homes which have been trashed inside and out, fittings broken and which are covered with filth inside, have neighbours very unhappy.

According to people who live near these houses they have become home to vagrants including drug dealers and prostitutes - and are nothing short of 'dens of iniquity'.
When the two properties were exposed in late April by the Knysna-Plett Herald, the municipality undertook to rectify the situation. The one house, which has become notorious in the neighbourhood, is what has become known as the magistrate's house since it was used by the chief magistrate from 1950 and the Department of Justice until a couple of years ago.
It seems the last person to live in it was the senior public prosecutor who vacated the house and moved to Bloemfontein in 2011.
Since then vagrants moved in and destroyed what is valued to have been a house worth around R3 million.
The other house, which has also been completely trashed, is in Mount Joy/Graham Road, Upper Central.
According to the Knysna municipality, "Erf 460 in Agnar Street (old Drostdy) as well as Erven 3406, 3407 and 3408 are all registered under the Department of Public Works even though it was utilised by an official of the Department of Justice."
Two weeks ago the municipality announced they had appointed independent contractors to clean the houses since the Department of Public Works had not taken responsibility for the state of these houses.
A week or so ago, the houses were boarded up, but this has not stopped the vagrants from returning, breaking wooden boarding down, smashing windows and removing padlocks from gates.
The Agnar Street house [magistrate’s house] was once again highlighted this week when the neighbour opposite, Margaret MacKay, said she would relentlessly go each day with a firearm and her big dogs to chase the illegal dwellers away from the house.
Other neighbours have contacted the Knysna-Plett Herald, today, Thursday July 21 to say that they are fed up with these houses, that action has to be taken to stop the vagrants – once and for all.
Not only are neighbours concerned about their safety, but of the property prices plummeting around them as a result of the houses being in the state they are.
More information to follow.

A view into the Mount Joy house where the window has been smashed again.
Click here for previous articles:
ARTICLE AND PHOTOS: ELAINE KING, KNYSNA-PLETT HERALD EDITOR
'We bring you the latest Knysna, Garden Route news'
Posted on: 10:00 Fri, 22 July 2016
Your Comments