A miracle for minor vagrants 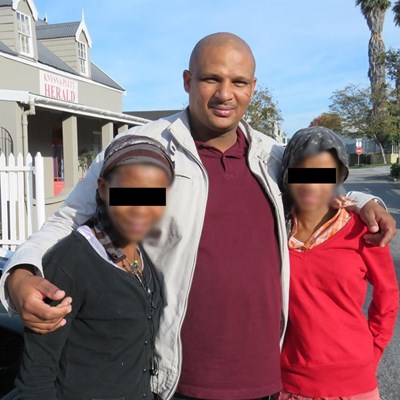 Both girls in the car with Michael Smith of Sinethemba on their way home to White Location, on Tuesday morning, May 17.
KNYSNA NEWS - Michael Smith of Sinethemba has been talking to and helping street children for more than 10 years, and despite not having the resources available to him, he makes miracles come true.
On Monday morning, May 16, having found out about minors squatting in inhumane conditions at the "magistrate's house" in Agnar Street, he went to talk to them.
Patience of a saint, dedication, passion and experience that has largely eradicated the problem of street children living in the town since he started with Sinethemba, are simply not enough for Smith to win this battle, or others for that matter, he says, but he is determined to try.
This particular situation, where there are two 16-year-old girls living in filth without food, sanitation, electricity or water, is one of those cases where Smith can only do his best, but his hands are largely tied.
Eventually Smith leaves the grim situation determined to help as far as he can, but he admits this is a huge challenge owing to all the resources Sinethemba lacks.
On Tuesday morning, May 17, Smith arrives at the Knysna-Plett Herald with the two girls in a vehicle he managed to borrow.
It took him hours, years of experience, to find the mother of one of the girls, and now both girls are going with him to a home where they are wanted.
Smith's work now is to mediate the situation with the family, find out why the girls ran away and find a permanent solution so these girls never take to the streets again.
Two other youngsters who attend Sinethemba are also bundled in the car as moral support and encouragement for the two "rescue" girls.
Sinethemba lacks resources
This happy ending despite the fact that Sinethemba has no vehicle as it has been broken with no money to fix it for two months, so Smith uses his own or public transport.
Sinethemba has no halfway house or premises in which to house street children until they can find permanent homes, so he can offer them nothing unless he can locate the homes they ran away from or find out where they came from. This is often am impossible challenge.
While Sinethemba holds valuable practical classes for street children who have dropped out of school and rehabilitates them, there is a shortage of volunteers to teach them skills they would need to get a job.
Sinethemba robbed
To top it all, last Friday morning, May 13, Sinethemba's humble premises were robbed. "Luckily we found our sewing machines and welding equipment left outside, because Allsound Security came in time, but this does not help," he says.
But never deterred, on Monday morning, Smith cautiously approaches the minors at the "magistrates house", and I see how if only he had resources he would win with the immense patience and genuine love he exudes.
The door of one of the side rooms of the house is gently prized open and Smith introduces himself, says that he just wants to talk and help if possible.
Smith talks to street children
He tells them about Sinethemba and how he can help them. Slowly their heads emerge out from under the filthy duvet cover and they start speaking to Smith.
After an hour of patience he manages to establish their names, the fact that they dropped out of Concordia school in Grade 6. Marilyn, as she will be called, says she left home because "my pa het my geslaan (my father hit me)".
It is unclear how the girls are related, but by sheer patience and obvious care, Smith manages to find out where a relative might be – Poppie who works somewhere in the industrial area of Knysna and neither girls know what her work is.
"Julle is pragtige jong meisies met 'n toekoms voor julle, maar hier bly julle in die donker. Ek wil julle help (You are beautiful young girls with a future, but here you are living in the dark.)" He finds out their birth dates and asks them what they got as a present, and both reply "niks (nothing)". They also admit to taking "ganga" and drugs.
A solution offered
Eventually nearly two hours later Smith has persuaded them that if he can find their mother who would take them back, he would fetch them the next morning, Tuesday, at 08:00.
Then Smith talks to another squatter known as Gert, who is 24. Smith knows him well as he has lived on the streets for 13 years.
They discuss why Gert dropped out of Sinethemba classes and is now living under these shocking conditions. It is clear that Gert knows and trusts Smith as he offers to help Smith wake the girls up the following morning in time to go home.
Eventually Smith leaves the grim situation determined to help as far as he can, but he admits this is a huge challenge owing to all the resources Sinethemba lacks.
A day later there is a happy ending thanks to Smith.

Sinethemba's History
Founder of Sinethemba, David Crowe, started this project in 2002. Crowe (now over 84 years old) and his wife Jane handed over the reins to Smith as the director of their beloved project, two years before he stepped down.
When Crowe handed over the reins of the organisation they surely knew that through Smith their dream would live on – to take Knysna's street children out of their living hell and give them another chance.
Cement floor and dream become haven to street children
What started as a cement floor in Khayalethu South became the Sinethema Youth Development Centre, the "saviour" of dozens of street children over the years. Since then the centre has continued to "save" children despite the challenges and the odds sometimes stacked against the children.
Smith (40) still keeps on fighting for every single child on the street to be rehabilitated, given a chance in life, whether as a result of a skill learnt at the centre or until the child has found a home. In many instances he fights against all the odds for children who have dropped out of school to be placed back into the mainstream school system no matter how long that process takes.
Smith tells of how when Sinethemba started in 2002, there were more than 20 street children roaming the streets of Knysna, but now there are only about four or five street children and they are being monitored.
"I was reading to the youth this morning from Michael Jordan's book about setting goals, step by step. We also sing a Whoopi Goldberg song, every Monday: 'If you want to be somebody, if you want to go somewhere, you better wake up and pay attention'," says Smith with a smile.
He is also quick to add that another one of his functions and responsibilities entrusted to him by the Crowe family was to bring the Knysna community on board, "to take ownership of the problem".
Help from 'wealthy' Knysna community needed
This matter is one of great concern because he has only a handful of donors, most of whom give R20 per month, and one generous donor who gives R4 000 per month. He receives about R7 000 in donations each month, which is "really not nearly enough considering the wealth in Knysna".
"Where are the wealthy people who should care about these kids, or at least that they are safe from the nuisance and danger of street children on alcohol and drugs? Businesses are a different story because there are so many charities knocking on their doors," says Smith.
Smith was born and bred in Buffelsnek village with three siblings, and his childhood played a great part in shaping who he is today.
"I looked around at all the drinking and drunkenness in my family and village, and was determined even then that my life was going to be different," said Smith.
This determination enabled him to matriculate from Knysna Secondary School in 1993. He then worked as a handyman and carpenter and, a year later, joined the Knysna Literacy Centre to teach illiterate adults.
"I studied through Unisa and got a diploma in adult education as well as life-coaching certificates." With lots and lots of hard work he eventually became the manager of the Knysna Literacy Centre (now Knysna Community Learning Centre).
When Smith was at the pinnacle of his career training illiterate employees of government departments such as Knysna Municipality, Knysna Provincial Hospital, SANParks and having opened night schools in Knysna and Plettenberg Bay, he joined Sinethemba in 2005.
"I had been in the youth ministry for more than a decade already, so I was ready for this challenge," he chuckles.
Smith is married to Kristal and father to Kyra (11) and Kaleb (6). Sadly, they lost little Megan when she was three, but this does not stop his tireless work, night and day.
Michael Smith of Sinethemba enters what has become known as the "magistrate's house" on Monday morning, May 16. It was his hope that by speaking to street children who were living in the house that he might be able to find a solution to the plight they are in: Photos: Elaine King
Click here for a previous article: Houses of horror in Knysna
ARTICLE AND PHOTOS: ELAINE KING, KNYSNA-PLETT HERALD EDITOR
'We bring you the latest Knysna, Garden Route news'
Posted on: 08:00 Thu, 19 May 2016
Your Comments