Houses of horror in Knysna 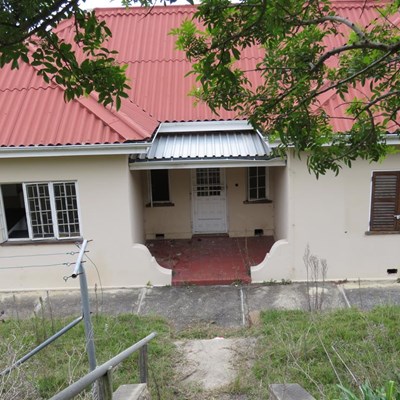 What is known as the old magistrate’s in Handel Street has been trashed and is now inhabited by vagrants living under the most shocking conditions.
KNYSNA NEWS & VIDEO - There are two homes in Knysna which have been inhabited by vagrants creating a living environment that can only be described as horrific.
The one house, which has become notorious in the neighbourhood, is what is known as the magistrate's house since it was used by the chief magistrate from 1950 until a couple of years ago. The last person to live in it was the senior public prosecutor who vacated the house and moved to Bloemfontein.
This house is in Handel Street flanked by Agnar Street, tucked behind the BP Garage in Main Road.
The other house, which has also been completely trashed, is in Upper Central near KFC.
It is not yet known who owns this house.
Three people were home when the Knysna-Plett Herald went to visit the ”magistrates house”.
Two 16-year-old girls and a 20-year-old man were found sleeping in one room on Thursday, May 12 in the afternoon, but they say that more people come back to the house at night.
There is almost nothing left of either of these homes. Windows are smashed, fittings like washbasins and toilets have been stripped, the old wooden floors are covered in rubbish and human excrement.
The one girl, whose name is being withheld for her own protection, showed one room where she was sleeping with the other two on a threadbare, absolutely filthy duvet cover, with stinking rubbish surrounding them.
Dressed in shorts that do not even zip up and inadequately clothed for the cold, she said that the only food she had yesterday, Thursday May 12, was soup from the Knysna Methodist soup kitchen – and there was no food in the house.
Scavenging in rubbish bins in town is how she and her companions find food.
Walking around the house it is difficult not to stand in human excrement, apart from the stench of urine and rotting refuse from newspaper used as toilet paper.
Piles of refuse litter every room in the magistrates house as well as the other house.
Neighbours claim these homes are havens for drug dealing and prostitution.
A Scottish neighbour who three weeks ago moved into her home from Sandton says she may as well have moved to Hillbrow.
Her name is also being withheld for her own protection, but she says that when she went to confront the people living in the house they threatened to slit her throat and poison her dogs.
This is an untenable situation for the people living in these homes, for neighbours and a blight on Knysna.
Knysna municipality to take action

When the Knysna municipal manager, Grant Easton was contacted about these two houses he immediately responded.
“We are checking our records to ascertain ownership and then we will follow up if we have complained to them previously. If not we will take action now,” said Easton today, Friday May 13, after being made aware of the situation and shown the photographs.
Click here for a photo gallery.
Watch a video below.

This 16-year-old girl is one of the vagrants who live in absolute squalor at the magistrate’s house.

The 16-year-old vagrant inside the house shows where a fire is built to cook or keep warm, when there is something to burn. Photos: Elaine King

Inside one of the houses.
ARTICLE: ELAINE KING AND NWABISA PONDOYI, KNYSNA-PLETT HERALD
Read the latest here.
'We bring you the latest Knysna, Garden Route news'