The man whose heart beats for Knysna's street children 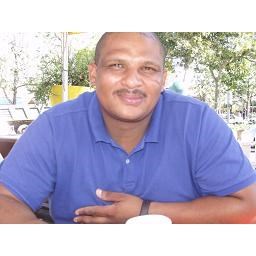 Michael Smith
KNYSNA NEWS - It is Michael Smith's passion for youngsters, his deep understanding of humanity and, essentially, his sincere love of people that undoubtedly prompted the founder of Sinethemba, David Crowe, to earmark Smith as the director of his beloved project, two years before he stepped down.
When Crowe (now 85) handed over the reins of the organisation that he and his wife Jane founded in 2002, they surely knew that through Smith their dream would live - to take Knysna's street children out of their living hell and give them another chance.
What started as a cement floor in Khayalethu South became the Sinethema Youth Development Centre, the 'saviour' of dozens of street children over the years. The Crowes had to know that, through Smith, the centre would continue to save children despite the challenges and the odds sometimes stacked against the children.
Smith (39) still keeps on fighting for every single child on the street to be rehabilitated, given a chance in life, whether as a result of a skill learnt at the centre, or because the child was placed back into the main-stream school system no matter how long that process took.
Smith still keeps fighting for funds for the centre and still comes up with a plan to fetch and drop those kids who live far from the centre, even though Sinethemba's only bakkie breaks down "pretty much once a month".
"I was reading to the youth this morning from Michael Jordan's book about setting goals, step by step. We also sing a Whoopi Goldberg song, every Monday: 'If you want to be somebody, if you want to go somewhere, you better wake up and pay attention'," says Smith with a smile that can light up a day.
He will agree that he was 'destined' for this kind of occupation which is more of a lifestyle than a career. Smith, director of the centre since last year, explains that when Sinethemba started in 2002, there were about 20 street children roaming the streets of Knysna, but now there are only about four or five street children and they are being monitored.
Smith's raison d être is his love of children.
He is also quick to add that another one of his functions and responsibilities entrusted to him by the Crowe family was to bring the Knysna community on board, "to take ownership of the problem".
He says that it is a great concern of his that he has only a handful of donors, most of whom give R20 per month, and one generous donor who gives R4 000 per month. He receives about R7 000 in donations each month, which is "really not nearly enough considering the wealth in Knsyna".
"Where are the wealthy people who should care about these kids, or at least that they are safe from the nuisance and danger of street children on alcohol and drugs? Businesses are a different story because there are so many charities knocking on their doors," says Smith.
Smith was born and bred in Buffelsnek village with three siblings and his childhood played a great part in shaping who he is today.
"I looked around at all the drinking and drunkenness, including the behaviour of my father when he drank and embarrassed me, and was determined even then that my life was going to be different," said Smith.
This determination enabled him to matriculate from Knysna Secondary School in 1996. He then worked as a handyman and carpenter and, a year later, joined the Knysna Literacy Centre to teach.
"I studied through Unisa and got a Certificate in Adult Education as well as life-coaching certificates. With lots andlots of hard work he eventually became the manager of the Knysna Literacy Centre."
When Smith (39) was at the pinnacle of his career having opened night schools in Knysna and Plettenberg Bay, he joined Sinethemba in 2005.
"I had been in the youth ministry in my church for two decades already, so I was ready for this challenge," he jokes.
Smith is married to Kristal and father to Kyra (10) and Kaleb (five). Sadly, they lost little Megan when she was three.
Meeting him leaves one humbled by a man with a vision so powerful, a love so great and a yet, a manner so gentle.
ARTICLE: ELAINE KING
'We bring you the latest Knysna, Garden Route news'
Posted on: 12:46 Thu, 02 April 2015
Your Comments