Diners have lunch in the foreground of the Westerdam cruise ship in Sihanoukville.

INTERNATIONAL NEWS - Dozens of passengers stuck for nearly a week on a US cruise ship in Cambodia disembarked Wednesday, after being given the all-clear from a deadly coronavirus.

The Westerdam made shore in Sihanoukville on February 13 after being rejected by five countries over fears its passengers could be carrying the new virus, which has killed more than 2,000 people.

Hundreds were allowed off after basic health checks - among them an 83-year-old American woman who was later diagnosed with the virus while in transit in Malaysia.

That raised fears many other Westerdam passengers could be spreading the virus as they scattered, although no other cases have been recorded.

Once the American woman's case was discovered, the remaining passengers on the Westerdam were ordered to stay on board, but they have now all been given a clean bill of health.

Swabs from the more than 700 crew members aboard were still being collected, a Sihanoukville provincial spokesman told AFP. 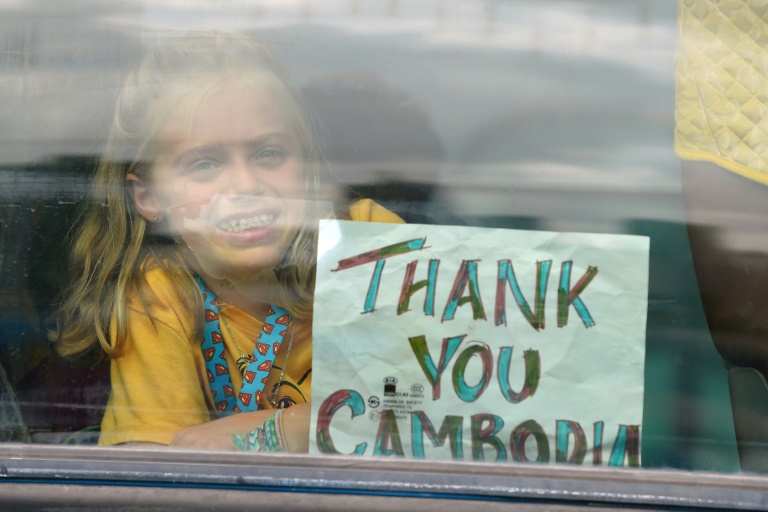 A young passenger from the Westerdam cruise ship holds up a sign on a bus after disembarking in Sihanoukville.

Cambodia's wily premier Hun Sen squeezed PR value from the arrival of the US-owned ship, greeting the first passengers to leave the ship with hugs and flowers.

"Thank you very much Mr. Prime Minister," a jubilant passenger - one among 230 who disembarked on Wednesday - told local TV as she left the ship.

"I didn't know him before so I am just grateful that he let us in."

The head of cruise operator Holland America said he was thankful for the help Cambodia provided.

"It's been a whirlwind, and I want to take a moment to say how sincerely appreciative of each and every one of you we are," Orlando Ashford told a crowd of passengers and crew, later walking off to the Sister Sledge song "We are Family".

In Phnom Penh, former passengers staying at a luxury hotel since Saturday rejoiced after Cambodia's health ministry said more than 700 people tested over the past two days have been cleared.

"All passengers have normal health with no noticeable problems and no-one had high temperatures," the ministry said in a statement.

"I want people to remember that... there’s a human behind each of these stories, and those who are ill deserve compassion," she told AFP.

The news comes as Southeast Asian foreign ministers prepared for a summit in Laos on Thursday with their Chinese counterpart Wang Yi on the COVID-19 outbreak.

Cambodia, like many of its regional neighbours, is a staunch ally of Beijing. It receives billions of dollars in soft loans, infrastructure, and investment from China.