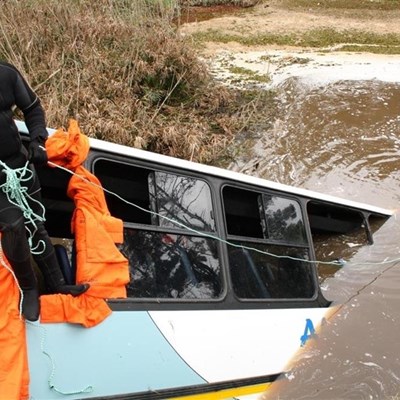 14 Rheenendal Primary School pupils and their bus driver died in the tragic accident on 24 August 2011.

GARDEN ROUTE NEWS - Praveen Singh (the owner of African Express) and Eugene Labuschagne of TJ's Testing Station in George will take the witness stand when the Rheenendal bus tragedy inquest hearing resumes at the Knysna Magistrate's Court from 16 to 18 October. Another expert witness is also due to testify when the inquest continues in October.

Before court adjourned on Thursday 25 July, Mark Cooper of Knysna Motor Strippers was called to the witness stand to relate to the court what his role had been in inspecting the ill-fated bus after the tragedy.

Cooper told the court that he had assisted all the experts when they conducted several roadworthy tests, including a roller test to determine the efficiency of the brakes. He confirmed that on the day that he assisted Martin Graham, former regional manager engineer for Tata with the roller test, they experienced total brake failure at four bar braking pressure.

During the first three days of the inquest hearing, the court heard the testimonies of Graham,Warrant Officer Johan Adam Botha (a mechanical expert from Pretoria) and Leslie van Oord (training lecturer at Gene Louw Traffic College). Both Botha and Graham were of the opinion that the bus involved in the tragedy was ill-maintained and that the defects the bus had prior to the accident contributed to the tragic death of the 14 Rheenendal Primary School pupils and their bus driver on 24 August 2011.

One affected relative said: "We are getting the truth and the truth shall set us free. Sitting here and listening to the experts testify just gives us hope. We are hearing things that we never would have known. We are grateful and thankful for the services of Martin Graham. He gave us hope because not many people would have done what he had done following the tragedy. We salute him."

Graham had volunteered his services to Transport and Public Works Minister, Robin Carlisle when he became aware of the tragedy.
Before Magistrate Derek Torlage announced that court proceedings would resume in October, he also commended Graham for his assistance and services. He further said that he, like everybody else, hoped that something good would come from the Rheenendal events.

In conclusion, Torlage urged the families to be strong and thanked them for their patience and understanding during this difficult time.