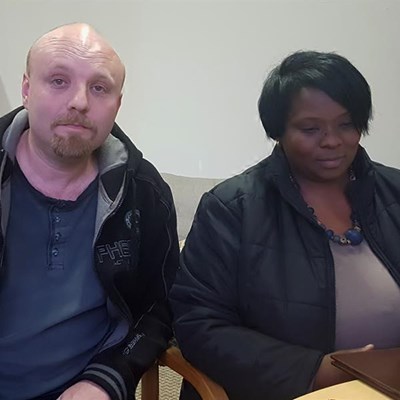 Knysna blogger, Mike Hampton met with the newly elected Knysna executive mayor, Eleanore Bouw-Spies on Friday, September 9, to conduct an open discussion.
KNYSNA NEWS - A service level agreement with an independent contractor, Out There Communications (Pty) Ltd, within the Knysna municipality has escalated to a full-scale online war of words.
Knysna blogger Mike Hampton alleged that the municipality made an illegal appointment in the appointment of Fran Kirsten, a journalist and PR consultant, as communications manager without following due process.
The municipality is however adamant that the contract was concluded above board.
"Please note that this is not a temporary appointment but a short-term contract appointment of a communications consultant from an existing municipal database. The then municipal manager Grant Easton negotiated the contract and instructed the paperwork to be completed. Once Easton was suspended the onus fell on acting municipal manager Carl Mattheus to complete the process.
As explained, he followed the approved supply chain management (SCM) policy 2016/17, which is in line with the 2005 supply chain management regulations. The appointment was done in terms of clause 19 of the policy, which allows for deviations from the supply chain management processes in exceptional circumstances where justification exists and the necessary approvals were obtained," explained the municipality.
Hampton maintains that this clause "seems to only prove that Kirsten's appointment is illegal".
According to the municipality, Out There Communications was contracted for a period of three months as a specialist communications consultant to iron out problems within the communications department and assist with the restructuring of the department so that a new organogram that accurately reflects the roles and responsibilities of this department could be finalised.
The contract, valued at R105 000, was not put out to tender.
Following complaints by Hampton over the appointment, he was granted a meeting with Knysna executive mayor Eleanore Bouw-Spies on September 2.
Hampton subsequently posted a 50-minute recording of the meeting on his blog www.knysnakeep.org. The recording revealed that Bouw-Spies acknowledged that the communications department had not been operating at an acceptable standard in the past.
Mattheus also acknowledged that the contract with Out There Communications had not been put out to tender.
According to Hampton, the controversy arose when communications manager Christopher Bezuidenhout became the mayor's assistant. He objected to Bezuidenhout keeping his salary while being moved into a newly created post in the mayor's office.
Bouw-Spies, during her meeting with Hampton, pointed out that Bezuidenhout had in fact been appointed as her office manager and that two posts for assistants for the entire mayoral committee had been created instead of the previous mayor's staffing structure. At the time of Bouw-Spies' election, the mayor's office did not have a personal assistant, as such Bezuidenhout stepped in to fill that position until the organogram was completed.
"Kirsten, who was contracted for the DA's election campaign, particularly for Bouw-Spies' mayoral candidacy, is now being contracted for three months without tender so as to fill Bezuidenhout's old post," said Hampton.
The municipality responded to this statement as follows: "It has been widely publicised that our council as a collective intends to change the communication structures within the municipality. Council's first priority is to finalise its organisational structure and while this is being done it would be fruitless and wasteful to put out a tender before council has determined how they want to move on. Out There Communications, being registered on our database, has been given an interim short-term contract."
During the mayor's campaign she made it clear that council would like to see that the municipal staff's skills set best matches the role within the municipality. "As Bezuidenhout has worked hand-in-hand with Bouw-Spies for several years the mayor recognised that his skill set was best matched as manager in her office. The mayor is not involved in procurement processes."
Hampton is calling the move "cronyism or, at the least, maladministration involving high-ranking officials".
He said he was not satisfied that the deviation in terms of the SCM policy and regulations was sufficient ratification for the service level agreement being entered into without having been advertised or without quotations being requested from other registered suppliers.
Read a previous article: Mayor 'disapponted' in Knysna blogger
ARTICLE: CANDICE LUDICK
'We bring you the latest Knysna, Garden Route news'
Posted on: 07:37 Thu, 15 September 2016
Your Comments