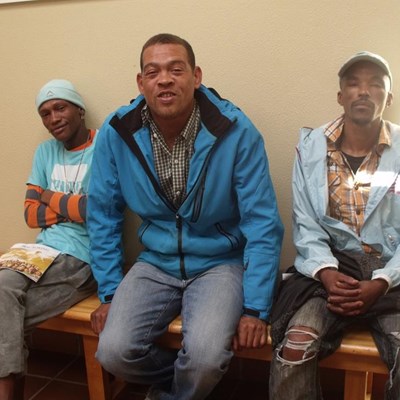 'Crime den' evictees Ender Kaptein, Kobus Rasta and Sitos Johnson await their fate outside the Knysna Court.
KNYSNA NEWS - Some residents at 3 Nelson Street, Knysna in what has become known as a 'crime den', arrived at the Knysna Magistrate's Court on Friday, April 10 expecting to be given their final marching orders that same day. However, they walked away quite satisfied after the municipality was ordered to advise the court on the prospects of alternative accommodation for them by April 24.
A series of unexpected events on Friday, suggested that Lady Luck was on the side of the residents who were expected to be finally evicted. Only four of the 11 respondents appeared in court since the others were either in jail or did not bother to attend.
On March 6, legal action to evict the 11 tenants from the property, which has literally become a "stinking eyesore" in the central business district, seemed to be the last step in the effort to realise the Nelson Street eviction, but it turned out to be just one more action in a continuing legal process.
Local lawyer Daan Dercksen was appointed by the joint liquidator Fanie Roux of George to lodge eviction proceedings and the first eviction notice and proceedings were initiated on Friday, January 22.
The tenants had not filed opposing papers to the first application by the deadline date of Friday, March 6. At the time, Dercksen confirmed this and explained that it meant that he could take the second step in the process of lodging an application to the court for the eviction in terms of Section 4(2) of Act 19 of 1998 (Prevention of Illegal Evictions Act- PIE), which he did on the same day.
Notice of the eviction was to be served on all eleven respondents named and living at 3 Nelson Street before March 13. Unless they had lodged opposing documents by the April 10 hearing, they would have been served a final notice to vacate the property by a court-determined date.
However, early in the morning of this court appearance, Dercksen told the Knysna-Plett Herald that while all the respondents had been served with the correct documents, the sheriff had failed to lodge the 'returns of service' papers with the clerk of the court. This meant that the case would not be heard until such time as the documents could be presented to the magistrate.
Dercksen asked presiding magistrate, Clifton Maseti, to stand the matter down until the end of the day’s court roll for the relevant documents to be delivered from the sheriff's office. The documents eventually arrived and the case could proceed at 11:00.
Local advocate Paul van der Berg appeared for Dercksen Inc and asked Maseti to adjourn the case until April 24, requesting that the Knysna Municipality be court ordered to advise on the availability of alternative accommodation for the respondents. Maseti granted the order.
Dercksen said: "The municipality has a constitutional duty to intervene and to make provision for alternative accommodation for the tenants, as far as reasonably possible. Thus far, the municipality, who has been joined as the 12th respondent to the proceedings, has been absent from any of the court proceedings, although its attorney, Donald Curtis, goes to lengths to be continuously updated about progress. I have been informed that Curtis will appear on April 24 pursuant to the court order. We do not want war with these people, but would rather strive to find a humane solution to the problem so that everybody is happy."
The municipality has been approached for a comment, but by time of going to print a response had not yet been received.
These eviction proceedings followed the final liquidation of the registered owner, Proximity Properties 28 CC on July 11, 2014. The sole member of Proximity Properties is Michael Merrick, a chartered accountant who lives on Thesen Islands.
Prior to the legal process to evict squatters at the property, it had already become infamous for alleged drug trafficking, prostitution, the harbouring petty of criminals as well as causing a civil nuisance.
The property dwellers do not have electricity or water and use toilet facilities at the Knysna Mall or surroundings pubs and restaurants. The fact that the property has no running water or electricity also poses environmental, health and safety risks for the community.
The respondents who did appear for the court case spoke to the Knysna-Plett Herald after the outcome.
Kobus Rasta said: "We do our best to clean the place even though nobody will believe us. It is not those of us who are coming here to court who cause the trouble [at 3 Nelson Street], but others who come there with stolen goods, drugs and who do bad things. But it is hard to use lanterns and candles, use a gas stove to make water hot in a plastic bath I bought. We do have to use the toilets at the garage or nearby pubs because we don't have any running water. We just want a place to live where we have these simple things."
Ender Kaptein, who grew up on Knysna's streets, has lived at this abode for six years. "Hey man, I just want a place to call home. I have been in prison a few times, but I try to sell fruit. I clean the place, I try to keep it nice, it's not all bad. I just want a place to live that is safe."
Delicia Levack said she had children who did not live with her, but she needed to stay somewhere to earn a living to help them.
Sitos Johnson said: "I will wait and see what happens. To have somewhere to go would be good because what other plans can we make."
Click here for a previous news flash.