Dine for kids' future in Knysna 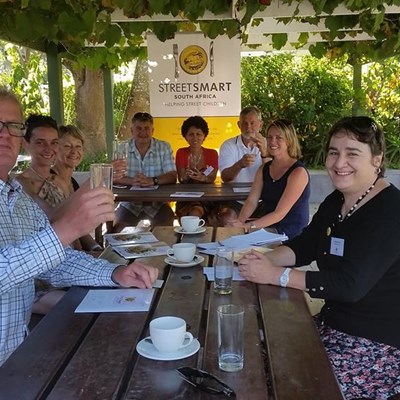 The organisers of StreetSmart SA, an organisation that raises money for street children through donations made by kind-hearted patrons of restaurants, are excited to start this worthy initiative in Knysna.
KNYSNA NEWS - Patrons of Knysna restaurants will soon be able to eat out and help rebuild a street kid’s life at the same time. StreetSmart SA is a non-profit organisation that raises funds for street children through donations collected from diners.
At a StreetSmart SA meeting on Thursday, January 29 at the Bell Tavern at the Belvidere Manor in Knysna, the chairman and co-founder of the organisation, Nils Heckscher said that the initiative has been a huge success in Plettenberg Bay and that he would like to get the Knysna restaurateurs on board as well. He said a minimum of five Knysna restaurants need to register before the initiative can be implemented.
How it works
Funds are raised by patrons who agree to have a donation of R5 added to their table’s bill. The participating restaurants place a small card on their tables to inform their patrons that R5 would be added, but it is still entirely up to the patron who may decline to five the voluntary donation or opt to give a bigger donation.
The money raised is distributed to a selected beneficiary in the community. In Knysna, the Sinethemba Development Centre in Khayalethu has been identified by StreetSmart SA to be the beneficiary this year. Sinethemba’s mission is to rehabilitate children and youth at risk, especially street children. Established in 2003, the centre's focus is on the youngsters' eventual self-sufficiency by getting the children off the street and back into school.
Two restaurants, the Knysna Hollow Restaurant and The Bell Tavern at Belvidere Manor have already signed up and started to support the initiative. Lauren Dorning, manager of the Castle Rock Café, and Jerome Simonis, owner of the East Head Café, also attended the meeting and said that they were considering implementing this initiative at their establishments. However, Simonis had some reservations about about adding the R5 to his patrons’ bills, saying that Knysna had a unique type of clientele who may not be too keen of such and addition.
Fantastic news!
StreetSmart SA was set up in 2005 by a group of concerned Capetonians under the patronage of Archbishop Emeritus Desmond Tutu and comprises board members representing business and the hospitality and tourism industries. Similar StreetSmart organisations also run independently in the UK, Australia, New Zealand, Canada, India, USA (San Francisco) and the Netherlands. Nationally StreetSmart SA has raised more than R1 040 000 during 2014.
Michael Smith, director of Sinethemba, said on Monday, February 2 that it is "fantastic” that his organisation has been identified as Knysna’s beneficiary. "This will help tremendously!” he exclaimed.
Keep them off the streets
According to committee member Sue Mills, StreetSmart SA is registered as a public benefit organisation as well as a non-profit organisation. StreetSmart SA promises that every cent donated by diners goes towards social and educational upliftment projects for street children. “StreetSmart's goal is to be part of the process of social normalisation and to encourage the public not to give money into the hands of a child as this keeps them on the streets. In essence, eating and donating at a StreetSmart restaurant is the responsible way to help a street child,” said StreetSmart SA administrator Reinette Retief.
Contact
For more information or to make a donation, contact StreetSmart SA at 021 418 0621 or info@streetsmartsa.org.za or visit www.streetsmartsa.org.za.
'We bring you the latest Knysna, Garden Route news'
Posted on: 11:19 Thu, 05 February 2015
Your Comments