Efforts to evict 11 from 'crime den' 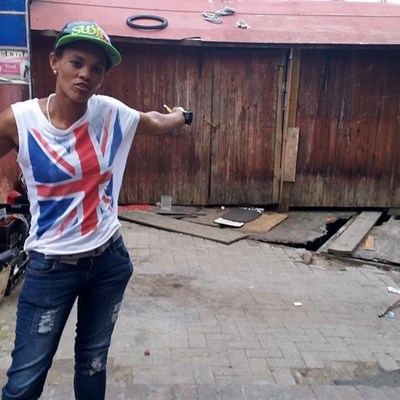 A woman of ill repute? Delicia Levack (33) of 3 Nelson Street in Knysna said allegations that she was a prostitute and drug dealer were not true. Levack and ten other occupants of the notorious property received notice from the Knysna Magistrate's Court that they would be evicted.
KNYSNA NEWS - “It’s not us, it’s the 'skollietjies' [hooligans]," complained three women who live at a notorious address in Nelson Street, Knysna after they and eight other occupants had received notice from the Knysna Magistrate's Court that they would be evicted from the property.
The property where the 11 occupants allegedly live illegally has been an eyesore in Knysna's central business area for many years and it has become infamous for alleged drug trafficking and prostitution and for harbouring petty criminals.
The eviction notice followed the final liquidation of the registered owner, Proximity Properties 28 CC, on July 11, 2014. The sole member of the Proximity Properties is Michael Merrick who is a chartered accountant and lives on Thesen Islands.
According to a local lawyer Daan Dercksen, appointed by the joint liquidator Fanie Roux of George to lodge the eviction proceedings, the 11 occupants of 3 Nelson Street will be ordered off the property on Friday, March 6 at 09:00. “If I don’t receive any opposing papers by Friday, February 6, the Court will be requested to grant a final eviction order on March 6,” Dercksen said on Friday, January 22.
A den of iniquity

Dercksen said that a “reliable source who cannot be identified” informed him that there had been no electricity or water supply to the property for some time. The person also told him that the dwelling was full of rubbish, condoms and dagga pipes; that the three female residents were prostitutes who lured their clients to the dwelling where they were sometimes accosted and robbed; that the occupants sold drugs freely; and that they used the grounds for ablution purposes, resulting in an unbearable stench.
There have also been allegations that they illegally breed pit-bull dogs on the premises and they break down wooden fences in the neighbourhood to build fires outside.
“In short, the unlawful occupation of the property by the first to the eleventh respondents have created an intolerable situation and should be terminated by this honourable court sooner rather than later,” stated the founding papers to the application.
Dercksen said that with the exception of one respondent, the other three women and seven men seemed to be involved with illegal activities, that posed environmental, health and safety risks. Sergeant Chris Spies, media liaison for the Knysna SAPS, confirmed that the police received numerous complaints about the activities at the address and that 'a number of crime prevention operations were conducted at Nelson Street".
Women of ill repute?

Upon visiting the premises on Monday January 26, the three women there, Delicia Levack, Juanita Appels and Marlene Plaatjies, denied allegations that they were prostitutes and said that they survived by begging. The also blamed the 'skollietjies' (hooligans) who used to live there of breaking down fences for firewood.
“We get our wood from Rubin Arries,” Levack said. The 'skolletjies', who had allegedly left the property some time earlier, were also blamed for the illegal breeding of pit-bulls. She admitted that they did not have running water or electricity and said that they used the toilet facilities at the Knysna Mall nearby and got water from the Long Barn Tavern. To the question about all the litter on the premises and the unpleasant smell in the air, Levack said, “You know, I’m the only one who tries to keep this place tidy. But the municipality has stopped giving us black bags and that's why the place is in such a mess.”
According to the court application, none of the current occupiers had ever been given consent to live there, but the women denied this and said that they had Merrick’s permission. “He himself gave us a key,” agreed Appels and Levack. Levack added, “We were big friends. He always gave us food and took us to the Hornlee Hotel."

But the friendship had apparently soured to such an extent that he had the water and power supply discontinued in 2012. When Merrick was asked about this alleged friendship on Tuesday, January 27, he said, "I don’t know what she’s talking about.”
Munipality’s problem

“Yes, now the problem is going to be shifted to the municipality to sort out,” said a friend with four gold teeth who came to visit the women during the interview on Monday. “They can’t just put these people out on the street; they have nowhere to go," he said.
In the court application, the Knysna Municipality was listed as the 12th respondent. According to Mosdell, Pama and Cox, the local attorneys appointed by the municipality, the municipality agreed that the occupiers should be evicted because they were posing an ongoing threat to the public’s interest and they had become a nuisance to the surrounding homeowners and businesses who allegedly complained on a regular basis. To this Dercksen replied that even though they 11 people were in the wrong for living unlawfully on someone else’s property, “they still have rights”. He said that the municipality had a duty to find them a more appropriate place to move to.
In February, last year the derelict main dwelling on the property was demolished following a demolition order granted by the High Court in December of the previous year, and served to the owner shortly thereafter. The owner had 30 days to comply, after which the municipality had the right to conduct the demolition itself and hold the owner responsible for the costs incurred. The Knysna Municipality appointed CX Tippers for the task and demolition started on February 11 last year.