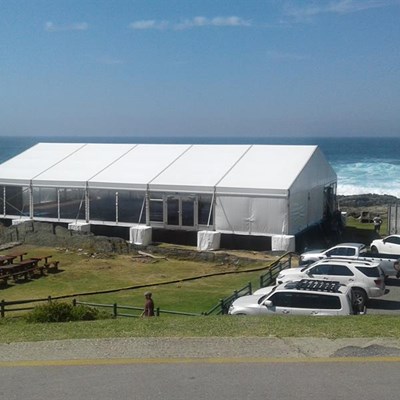 The temporary restaurant that went up in a flash to accommodate visitors to the Wilderness part of SANParks after the Cattle Baron and shop burnt down last week. Photos: Supplied
GARDEN ROUTE NEWS - SANParks wasted no time in making the best plan possible after a fire a week ago gutted the Cattle Baron Restaurant and shop in the Tsitsikamma section of the Garden Route National Park earlier this month.
"A temporary structure for the Park’s restaurant is close to the popular ‘Skietklip’ in the Storms River Rest Camp  -  ‘Skietklip’ is where booming breakers of the Indian Ocean relentlessly pound rocky shores," confirmed communication manger for SANParks, Nandi Mgwadlamba.
The restaurant and shop were gutted on November 25. The fire is said to have started in the kitchen of the restaurant.
A helicopter was dispatched and the fire was prevented from spreading to the nearby forest area and rest camp. The rest camp remains unaffected and safely tucked away as mop up operations are underway to clean the affected site.
"‘We expect all clean-up operations to be completed by the end of this week [December 10]," says Paddy Gordon, park anager of the Garden Route National Park who also confirmed all necessary certificates that comply with health and safety regulations were obtained.
Visitors were advised to bring their own food and drinks or use facilities at the nearby Storms River Village. But now the temporary structure is up and will be operating from this weekend, December 10 and will be serving food and drinks.
The Gate Project
Mgwadlamba says in addition‘We wish to thank visitors to the park for their patience and support.’
The construction of the gate project will be partially completed by mid-December. The gate can only be fully operational by the end of February. The delay was caused by recent rains and the procurement process for material.
Once completed, the gate project will make it far more efficient to enter and exit the Storms River Rest Camp.
For the upcoming season, visitors will use the newly constructed side road to enter the Park constructed to ensure access to the Park without hindrance as well as through the gate under construction. The lanes will be open but cubicles will be ready in February.
Other upgrades that form part of the +R17 million project include a newly completed office block, development around the Big tree (which is ongoing) and the restaurant area. All work is adhering to environmental legislation and standards and visitor experience and safety will not be compromised.
The Big tree project
There are two aspects to the construction project of the Big tree just off the N2, some 10 minutes from the Storms River Rest Camp, both happening concurrently.
Provision of bulk services such as reticulation, water and sanitation. This project is expected to be completed in early February.
A hub at the big tree (bigger project) is expected to be completed in August.
"Although construction is progressing well at the entrance of the Big tree, visitors walk a few minutes on a boardwalk far from the construction site to view one of the Tsitsikamma forest’s giant affectionately known as ‘the Big tree’. The +800 year old tree is 40 meters high and about nine meters in diameter.
There are guards and ample parking space provided for visitors to the Big tree," says Mgwadlamba.
Click here for previous articles:
The inside of the restaurant which is expected to operate from this weekend.
A stunning view from the temporary restaurant at the Wilderness SANparks camp. Photo: Supplied
'We bring you the latest Garden Route news'

18 %
No: We should be able to live our lives normally