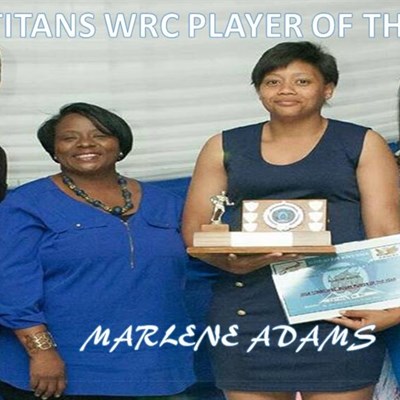 From left: Coach Aschin Klein, Knysna mayor Eleanore Bouw-Spies, player of the year Marlene Adams and council speaker Georlene Wolmarans. Photo: Supplied
KNYSNA NEWS - Titans Women’s Rugby Club (WRC) captain Marlene Adams has been named the club's players of the year for 2016, at an awards gala in Knysna on Friday, December 2.
The club held their 11th annual awards function last Friday night at Vermont centre. The SWD EaGirls & GK-Titans WRC lock forward fought off strong challenges for the top award from number eight Prelene Pegram, front-row Monique Smith and wings Rashieda Saaiman and Faith-Hope Gosling.
In the build-up to the main event, two speakers addressed the Titans players, partners and parents. Titans WRC founder and director Aschin Klein spoke about the history of the club, its past and present successes as well as the academy programme for primary school girls.
He also gave an overview of the newly introduced youth training programme in the SWD, which is a programme of SA Rugby. He concluded by thanking the parents for their commitment and support as well as all the players, and congratulated the players for representing the club on international, national and provincial levels.
The keynote speaker of the evening was Knysna mayor Eleanore Bouw-Spies, who highlighted the fact that when she researched women’s rugby she could not find a lot on the topic even though women and girls play by the same rules as men, who receive much more coverage.
The mayor also acknowledged the work that Coach Ash is doing in the community with girl’s rugby and admitted that the Knysna municipality has not given their best support in the past. She committed herself and that of the municipality, however, to support the team much better going forward.
The mayor concluded by telling the young ladies that they are true role models for other youngsters in their community and that they must never give up and keep working hard.
The speeches were followed by the handing out of participation certificates, first to all the academy children, then the senior players.
Before the business end of the evening started, players who represented the Titans WRC at provincial national level received special award certificates in recognition of higher achievement before the various performance awards were handed over.
'We bring you the latest Knysna, Garden Route news'