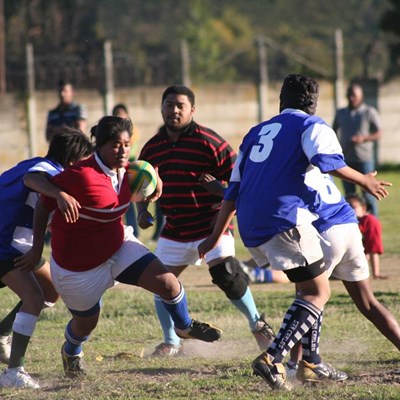 Brandy Agulhas (in red jersey) on the attack during a Titans WRC game against George. Photos: Supplied
KNYSNA NEWS - The Titans women’s rugby team were established during 2005 under leadership of Aschin Klein, who is since then the director of rugby and chairperson of the club. This year the Titans women's rugby club (WRC) are celebrating their 11th year as the most successful sports club in Knysna.
We have over the years produced more the 40 provincial players, three players with national recognition, SA u/20 and SA u/16 players, Knysna’s first female Springbok as well as Knysna's first national sevens player, and Knysna's first and only national coach.
Our head coach, Aschin Niack Klein, known as Coach Ash, was invited to coach the Kenya international sevens rugby team. During July and August 2015 that team toured to Dublin, Ireland for World Rugby Women's sevens series qualifier, where Kenya reached their first ever final and winning the bowl final.
They also finished in overall ninth place, the best ever at a world rugby event for Kenya ladies, winning three out the five games for the weekend.
Coach Ash also toured to Johannesburg during September 2015 for Rugby Afrique, women Olympic qualifier, where the team finished second and qualified for the 2016 Rio Olympics, winning five out of the six games of the weekend.
Under the guidance of Coach Ash the Titans WRC has became the pacesetters for success in Knysna. Players from this club come from mostly the previously disadvantaged or socially challenged greater Knysna areas.
During the 2016 season the club produced 12 provincial players in the various women's rugby teams in the SWD Eagles rugby union as well as a provincial rugby coach. The club also delivered two provincial u/13 boys through their after school development programme at the Kaiwhana Titans Rugby Academy.
In only 11 years the Titans WRC has delivered more provincial rugby players than most sports clubs combined in Knysna. During the 2013 rugby season, world rugby coaching educator Anthony Heugh evaluated Coach Ash for his world rugby level 2 assessment, whereby he (Coach Ash) received an excellent accreditation. This was, according to Heugh, a very rare occurrence in South Africa. Heugh, who was also previously involved with the coaching of the Springbok women's team, had huge admiration for the skills level of the Titans WRC players who were used in the assessment session.
He said that the girls really had a good understanding of the game – what key factors and functional roles are, their skills level was very good and their understanding of the game in combination with their skills level was something not seen in women's rugby at top level.
Coach Ash believes that within the next 12 to 18 months, four to five of the Titans WRCa's senior players could be called up to the national training squad.
"I do believe that a player like our captain Marlene Adams, currently one of the best locks in South Africa who has only lost three of her own line-outs this season, will receive a call-up. She can also play anywhere among the loose forwards.
"Monique Smith, the cousin of current Springbok Mathrin Simmers, also stands a very good chance. Smith came through the SWD ranks as captain of the SWD u/16 and u/18 teams and has this year made her mark in senior rugby as a loose head prop, but she is just as comfortable at either tight head or hooker. Smith had the opportunity this year in her first game of the season to scrum against three of the current Springbok front row players when SWD faced Border women's rugby, and she literally dismantled all three of them in one game.
"Prelene Pegram also former captain of the SWD EaGirls u/16 and u/18 teams, also made her debut this year for the senior team and arrived with a bang against the Bulls and former national champions. Pegram was also part of the SA Rugby Union u/16 high performance squad for girls in 2013. Pegram plays Nr 8 but is equally comfortable anywhere among the loose forwards or locks.
"Brendelien Brandy Agulhas is one of the Titans' most senior players, who received a call up to the SA u/20 squad in 2007 but was denied an opportunity to travel with the squad after a storm and floods caused her to miss her flight. Agulhas has regained the same form and is in even better shape this time around.
"Lastly, Ezryn van Aswegen, currently a student at the University of the Western Cape, has been part of the SA u/20 squad that represented the country at the 2013 nations cup and has been part of the SA students sevens teams every year since. Ezryn is a very talented backline player, mostly used as an inside centre because of her size, but is equally good at fly half and full-back with the ability to kick to goal.
"The Titans are blessed and looking ahead to the build-up to the next Women's Rugby World Cup 2017. These players, all under the age of 25, will be well matured by then and are players to look out for," concluded Klein.
The Titans WRC 2016 provincial representation SWD EaGirls senior team
Marlene Adams
Monique Smith
Prelene Pegram
Brendelien Brandy Agulhas
SWD EaGirls u/18
Angelique Stroebel
Zikhona Langbooi
Keyalin Pegram
Nicole Solomons
Faith Hope Gosling
SWD EaGirls u/16
Tarrin Calvert
Desmonita Miller
Chante Cornelius
SWD boys u/13
Zane Terblanche
Enrico Jansen
SWD EaGirls u/18 head coach
Aschin Klein
Twitter: @Titans_WRC / @CoachAsh14
'We bring you the latest Knysna, Garden Route news'