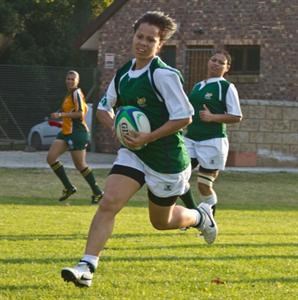 Knysna's own, Mathrin Simmers (24) was recently capped as a Springbok when she was called up to play for the South African National Women's Rugby Team against England's Nomads in Cape Town. (Photo: Vomazonke Photography.)
KNYSNA NEWS - Knysna locals proudly watched as one of their own, Mathrin Simmers (24), Knysna's latest Springbok rugby player, took to the field as part of the South African Women's Rugby Team, playing against England's Nomads in Cape Town on June 20 and 23.

Simmers, who is a founding member of Knysna Titans' Women's Rugby Club (a senior women's rugby club with its origins in the Greater Hornlee area of Knysna), was selected to play for the South Western Districts (SWD) Eagirls team in 2006 and again in 2007, but only started playing for the Eagirls towards the end of 2008 as part of their sevens team and in 2009 she played for their senior women's side.

"Mathrin played a major part in the success the teams have enjoyed under Coach Riaan Laimeley during the last three years, which included winning the B-Division of the Ladies Curry Cup, the plate trophy in the National Sevens Tournament and taking top spot in the South African National Women's Tournament during the 2011 season," explained proud Titans' coach, Aschin Klein.

Simmers is currently the most capped player within the Titans team. She has played 78 games, scored 119 tries, and converted 54 (80%) of those tries herself. "Mathrin now has her sights set on working her way towards a possible Olympic spot as part of the SA Women's Sevens team for the 2016 Olympic Games," said Klein.

Klein further said that the Titans team is very proud of the fact that four of its senior players, Marlene Adams, Shannon-Lee Smith, Brandolene Agulhas and Mathrin Simmers, were selected to play for the SWD Eagirls senior team for the 2012 season. This team forms part of the National Ladies Curry Cup Competition. Not only are the Titans senior ladies doing well, three of its players, Prelene Pegram, Monique Smith and Philencia Soekoe, play for the SWD Eagirls u/16 team.

In closing, Klein explained the origin of the Titans Women's Rugby Team: "The club has always been 'community development' oriented, and this mantra continues to drive them today. Their principle goal is to facilitate the personal development of their members and their strategy is to include as many people from within the community as possible in all of their initiatives and activities."

For more information about the Titans Women's Rugby Club call Aschin Klein on 073 253 8809.