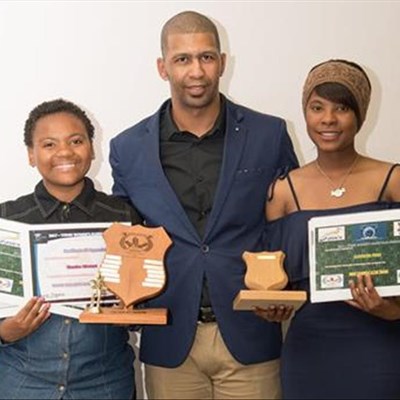 KNYSNA NEWS - The Titans Women's Rugby Academy (WRA) and the Greater Knysna Rugby Club's (GKRC) annual awards ceremony was held recently with players from both clubs being honoured for their achievements throughout the year.

This was the 12th awards evening for Titans WRA since its inception in 2005, and the first for the club. The gala event was held at Vermont Centre in Hornlee.

On Sunday evening 5 November Marlene Adams and Justin Damons came out on top as the rugby player of the year for the respective clubs.

Myners' message to the players was to dream big and work hard, and the importance of unity – not just in team success but also in individual success.

After the speeches were done and food was served, all the players received their certificates of participation, which saw the "roof being lifted" as players celebrated each other. The awards part of the evening started off with recognition certificates being handed out to players of each club who represented the club in either a provincial or national capacity.

These were players who made it into the SWD EaGirls teams as well as the Springbok teams during the 2017 rugby season.

The good form of Damons this season that earned him the nickname "The Human Bulldozer" because of his destructive power runs either through or over players, led to him receiving the first-ever player of the year award for his club.

Adams, the 2016 Titans WRA player of the year, had an exceptional year for the Titans leading the charge for her club, but also represented the Titans as part of the SWD EaGirls team.

The female version of Bakkies Botha as her opponents will tell you, Adams left her mark this year in such a way that she was also named the SWD EaGirls best forward player of the year 2017 at the SWD Rugby Union's awards evening in October.

"2017 was a great year for both the Titans WRA as well as GKRC, with the Titans finishing as runners-up in the SWD Women's Rugby club competition while Greater Knysna finished third in the SWD Coastal League South section.

"Both Adams and Damons had exceptional seasons and are well-deserved winners of these awards," said coach Aschin Klein.