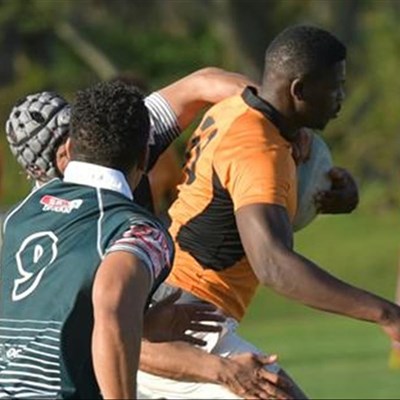 KNYSNA NEWS - In a highly anticipated post-season return fixture between the mighty Pacaltsdorp Evergreens and the local glamour team Greater Knysna Rugby Club, the host surprised everyone with easily their best performance this season according to the coach, even though they lost the game.

During a preseason game at the beginning of the year Evergreens, the defending SWD champions at the time, gave Greater Knysna a rugby lesson, beating them 104-7.

During the 2017 season, Greater Knysna showed that they learned from that expensive lesson and dominated the SWD Coastal league, setting the pace and only losing three out of their 16 games for the season.

The SWD EaGirls beating the Boland Women's team at Loerie Park set the perfect scene for this fixture on 2 September and with about a thousand spectators, the host did not disappoint.

From the kickoff the guys in black-and-gold dominated the visiting former champions with various line breaks from elusive running skills, and Zaydon Booysen scored the first try three minutes into the game.

Evergreens immediately hit back with an unconverted try of their own, keeping the host in the lead.

After another try for Knysna, by right wing Dumani Royi, failed to take the game away from the visitors, the experienced Evergreens team soon came back with two tries of their own, and by half-time they were in front with a score of 29-14.

The second half again started with a bang and even though two of Greater Knysna's top players were off the field with injuries, the host dominated the former champions for the first 20 minutes, but could not convert pressure into points.

Late in the second half, Greater Knysna finally broke the defensive effort of Evergreens to get back within eight points of the visitors. An unconverted try by captain Justin Damons brought his team back within three points of Evergreens and a chance to cause a big upset.

Evergreens proved why they are champions of SWD Rugby by speeding up the game in the last 10 minutes and scoring three tries to win the game 48-26.

"This game will give my boys the much-needed confidence and hunger to go into the off season training to get ready for the next season," said coach Aschin Klein.

Ludwe Vara succeeded in three conversions for Greater Knysna, while Masekhane Sithole was named man of the match.