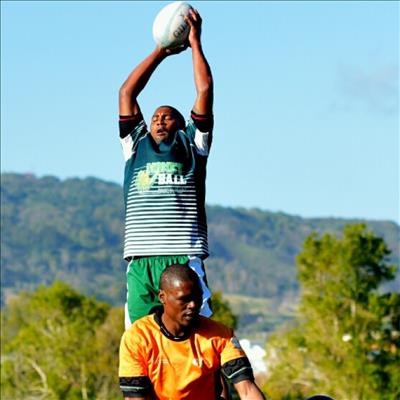 KNYSNA NEWS - In a highly anticipated post-season return fixture between the mighty Evergreens and the local glamour team Greater Knysna Rugby Club, the host surprised everyone with easily their best performance this season.

During the preseason at the beginning of the year Evergreens, the defending SWD champions at the time, gave Greater Knysna a rugby lesson, beating them 104-7.

During the 2017 season Greater Knysna showed they did learn from that expensive lesson and dominated the SWD Coastal league, setting the pace and losing only three out of their 16 games of the season.

The SWD EaGirls beating the Boland Women's team set the perfect scene for this fixture and with about 1 000 spectators watching the game the host did not disappoint.

From the kick-off the guys in black and gold dominated the visiting former champions with various line breaks from elusive running skills and also scored the first try of the match three minutes into the game, after a well-timed pinpointed cross-kick from fly half Craig Kamoetie reached the fullback Zaydon Booysen, who scored 15m from the sideline.

Evergreens immediately hit back eight minutes into the game with a try of their own but with an unconverted try the host still led over the former champions. The boys from the northern areas of Knysna showed off with their running skills with some great counter attack, with one leading to the second try scored by the right wing Dumani Royi, converted from the touch line by Ludwe Vara to give the host a 14-5 lead 28 minutes into the game.

Greater Knysna failled to take the game away from the visitors by throwing away two easy tries as well as losing out on an open try when Evergreen defender knocked down a two-on-one pass to the Greater Knysna winger. The experience of the former champions from Pacaltsdorp kicked in during the last 10 minutes of the game when they saw lack of game fitness was catching up on the host and sped up the game, scoring four quick tries to take a 29-14 half-time lead.

The second half again started with a bang and even with the fly half and fullback both off with injuries, the host dominated the former champions for the first 20 minutes of the game but could just not convert presure into points.

Greater Knysna finally, in the 62nd minute of the second half, managed to break the defensive effort of Evergreens to get back within eight points of the visitors. An unconverted try in the 70th minute of the game by Greater Knysna captain Justin Damons, taking five Evergreens players with him over the try line, brought his team back with three points and a chance to cause the biggest upset in SWD Rugby's history.

This, however, was not on the cards as the visitors showed why they are the multi-times champions of SWD Rugby. They simply repeated the drill of the first half, speeding up the game in the last 10 minutes and scoring three tries to win the game 48-26.

" I am very happy with the effort of my boys today. Yes, the score does not really reflect the game but it does reflect the class of the former champions. Even though it was not Evergreens’ strongest possible team it was still a quality team featuring players like Buran Parks, the former SWD Eagles player,” said coach Ash after the game.

“This game will give my boys the much-needed confidence and hunger to go into the off-season training to get ready for the next season. Today’s game was not really about wining or losing but about building friendships and rugby relationships. We are looking forward to hosting Evergreens again early in the new year in our annual preseason fixture."