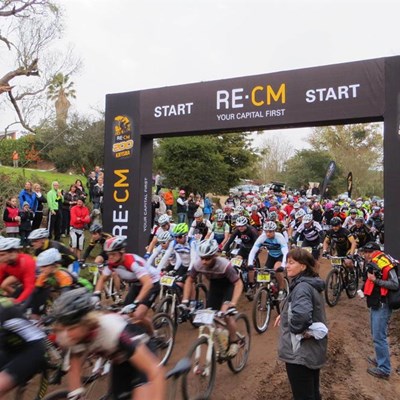 According to race director Patric Mosterd of Garden Route Events, the limited field for next month’s event has now been increased to a total of 350 participants across solo and team categories.

“Last year we were fully subscribed and had to turn so many riders away.

“This year, we’ve been able to accommodate a few more without detracting from the exclusivity of the event by increasing capacity at our race village at Thesen Island Harbour Town.”

Mosterd said the 200km stage race was aimed at social riders who managed between seven and 10 hours of training a week and could comfortably complete around 65km a day.

“This is about a lifestyle weekend. Most mountain bikers are ordinary, hardworking people who are raising families and striving for a little downtime while trying to handle the stresses of modern living.

“It’s still not for the faint of heart or the unfit but it’s certainly achievable with a bit of committed training.”

While this was traditionally a team event, he said the solo category had been growing steadily and now accounted for approximately a third of the field.

“It’s probably also a symptom of our busy lives that people are finding it increasingly difficult to meet up with partners who can ride at the same pace as them and find time in their day to train together.”

Mosterd said the routes were largely unchanged from the previous edition but would offer a few surprises for regular participants.

“On day one we start in the Knysna Elephant Park. The Wittedrift tar road section has been replaced by a magnificent new mountain ridge route heading north towards Buffalo Hills.”

“That’s the same one many non-participants sought out, unsuccessfully I might add, after last year’s event.”

The route also offered an alternative finish along contour paths and via downhill singletrack, he said.

“The second stage starts in Rheenendal and heads towards Krisjan-se-Nek, Dalene Matthee’s old stomping ground and inspiration for her book Kringe in ’n Bos.”

Mosterd said the historical Millwood Goldfields would lead riders past vast open views of the Knysna Heads before they hit a fast downhill section from Portland Heights and down the Phantom Pass singletrack via the old quarry.

“The highlights of day two are the two fun enduro sections – one uphill and one downhill.

“The uphill one is particularly spectator-friendly and family and friends are encouraged to watch their favourite riders from a beautiful vantage point at Krisjan-se-Nek in the heart of the Garden Route National Park.”

He said the fastest male and female riders over the two sections would be named the Ultimate King and Ultimate Queen and claim a prize purse of R5 000.

“Day three starts at the Harkerville Forest Station and follows a brand-new scenic indigenous forest route towards Plett before taking a sharp right towards the cliffs above the Indian Ocean.”

The Harkerville Red Route will then take riders towards the Cape Pine plantations before the final descent into Knysna and the lagoonside stretch to the finish.

Mosterd said a portion of riders’ entry fees would be donated to one of their long-standing charitable beneficiaries, the Knysna Sport School.

“They do fantastic work locally by helping disadvantaged kids through sport.”

Enter at www.recmknysna200.co.za.
'We bring you the latest Garden Route, Klein-Karoo, Hessequa news'