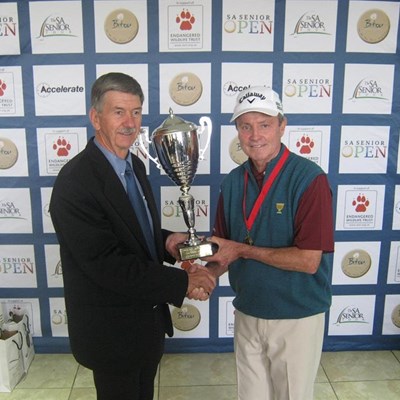 Mark McNulty receives the SA Senior Trophy from tournament director Pat Lowth. Photo: SAST.
SOUTHERN CAPE NEWS - Mark McNulty returned to his vintage best to seal a sensational wire-to-wire victory in his debut in the R500 000 SA Senior Open on Friday.
The 63-year-old closed out a final round 71 with a birdie finish at Plettenberg Bay Country Club to win by five strokes on 14-under-par 274 from European Tour winner James Kingston.
McNulty – an eight-time Champions Tour winner and eight-time Sunshine Tour Order of Merit winner – threw down the gauntlet as he racked up seven birdies for flawless seven under 65 in the opening round and clung in pole position with a second round 71.
He went low again as torrential rain and wind swept across the popular Southern Cape course in round three and fired a sublime five-under-par 67 to pull six shots clear of Kingston.
In the final round, McNulty bogeyed the second and third holes and Kingston rallied with back-to-back birdies after a bogey start. He added another gain at seven, but the much-anticipated charge never got off the ground.
McNulty got himself back to level with birdies at 10 and 12 and calmly picked off par after par to the finish
line before knocking in the winning birdie putt for a grandstand finish.
“To say I am pleased would be the understatement of the year,” said the delighted McNulty.
“I had a couple of social rounds before I came down to Plettenberg Bay, but I haven’t played competitively since July last year. Alison and I travelled to the UK late last year for five weeks and I played a bit over there. The game felt okay, but when I got back to San Lameer my game was absolutely rubbish.
“I did put a bit of work in last week because I figured it would be better to arrive with a C-game at least. I’ve rarely led from the start and won, and there I was at three under through the first four holes in the first round and six under by the time I reached the turn.
“I was going up against some seriously in-form players like Chris (Williams) and James (Kingston), coming off a one-two finish on the European Senior Tour. I had absolutely no expectations coming into the championship, so you can image my delight. Everything just came together really quickly and the game was pretty solid. It was great fun playing against the youngsters, which makes this win extra special.”
Kingston closed with a two-under 70 to finish ahead of Roger Wessels, who posted a 69. Michael Green finished in fourth on 286 with a final round 73 and Kevin Stone’s 73 earned him fifth on his own at one over 289.