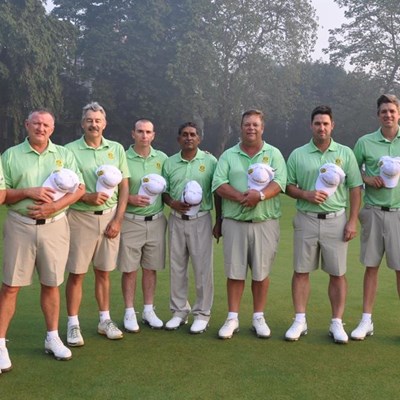 The SA Senior and Mid-Amateur Teams (left to right: Jock Wellington, Steve Williams, Francois le Roux, David Young (assistant manager), Morgan Phillips, Josef Fourie, Gerlou Roux, Stefan Blommaert and Shaun Stapleton.
NATIONAL NEWS - The South Africas Senior and Mid-Amateur teams have thoroughly enjoyed the magnificent hospitality from the Indian Golf Union since their arrival in India on Tuesday, but the two four-man sides are ready for the gloves to come off when the ground-breaking Golf Test Series against India tees off at the Royal Calcutta Golf Club today.
“Today marks the first time in South African amateur golf history that a senior amateur team fly the flag for our country on the international stage,” said South African Golf Association president (acting) Geoff Taylor.
“Needless to say, it’s a big day for Steve Williams, Francois le Roux, Morgan Phillips and Jock Wellington and they are absolutely champing at the bit to get the action underway.”
The senior quartet will face Amit Luthra – a 1982 Asian Games Gold Medallist and 2016 All India Senior Championship winner – as well as Vijay Kumar Bhadana, Anil Jule and Sanjay Kolhatkar.
South Africa’s number ranked one Williams said the team are primed for the challenge.
“It was pretty special to step foot here on the hallowed ground that is Royal Calcutta Golf Club,” said the reigning Indwe Risk Services SA Senior Stroke Play champion.
“This is the oldest golf club outside the United Kingdom and the second oldest in the world and we all count ourselves extremely privileged to be playing at such an iconic course. We had two productive practice rounds that helped us adjust to the conditions and to come to grips with the layout. Now we just want to make history.”
The South African mid-amateur team features two-time SA Mid-Amateur Stroke Play champion Gerlou Roux, recent Bobby Locke Open winner Shaun Stapleton, Josef Fourie and Stefan Blommaert. Their Indian counterparts are three-time Sri Lanka Amateur Golf Championship winner Simarjeet Singh, HS Kang, Aditya Khaitan, and Kailash Dhiwar.
“The Golf Test Series will be played in similar style to the Ryder Cup,” Taylor said.
“We will have four Foursomes matches on day one, four Fourball matches on day two and eight Singles matches on the third and final day.
“The hospitality from the Indian Golf Union (IGU) has been absolutely superb and the players have thoroughly enjoyed themselves, but the main talking point has definitely been the golf course.
“Royal Calcutta is a shot-makers’ dream. Driving accuracy is a premium and the greens are tiny targets that require pin-point accuracy from the approach shots.
“If you are even just slightly off-target, you face chip shots from very tough grass surrounding the greens. The difficulty factor did not detract from the enjoyment during their practice rounds, though.
“It is currently winter in India, but that only means that that daily high temperature drops hovers around 25 degrees Celsius. We are not expecting rain and so far we have not experienced the course in the wind. No doubt windy conditions will make a challenging layout even tougher to negotiate.”
Taylor said the first Golf Test Series in India will be dedicated to the memory of senior player Mellette Hendrikse, who unexpectedly passed away just days before the teams travelled to India.
“Mellette was selected to represent the senior team and as a mark of respect, all the teams will observe a moment of silence during the opening ceremony,” said Taylor.
“The South African Golf Association has also awarded Mellette his full Protea colours posthumously and to recognize his achievement, the teams decided to dedicate this first test to Mellette.”
ARTICLE: LALI STANDER
'We bring you the latest Garden Route, Klein Karoo, Hessequa news'