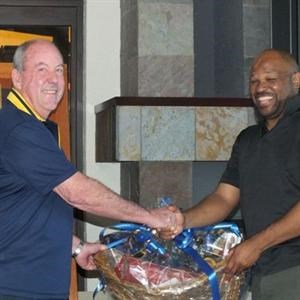 Rotary Club of Knysna’s president Rob Clark presents the winner of the thirteenth Annual Rotary Club of Knysna Charity Golf Weekend, Moses Kekana, with a Rotary Ann hamper.
KNYSNA NEWS - Four-hundred-and-three rounds of golf on the Simola, Knysna and Pezula golf courses during the thirteenth Rotary Charity Golf Weekend (May 25 - 27) raised a whopping R95 000 for charity, R40 000 of which came from local businesses and individuals.

What started as a Saturday afternoon event at Knysna Golf Club many years ago has grown into a three-day event with Simola Country Club and Pezula alternating as hosts on Fridays and Sundays.

In 2002, the then president of the Rotary Club of Bredasdorp, Nico du Plessis, accepted Knysna's invitation and brought a group of 12 golfers to play in the Roatry Club of Knysna's Golf Day. This year there were 115 visiting golfers mainly from the Western Cape, but also from Port Elizabeth, Durban, Johannesburg and "even two from Swakopmund", said Peter Klews, PR of Knysna Rotary Club.

Klews explained that weather throughout the weekend "was outstanding, true to the 'Secret Season' label this time of year in the Garden Route has been given". The golfers enjoyed a good day of golf at the Simola Golf Course, which, thanks to the green keeper, Gordon Johnston, was in immaculate condition. The day's golf was followed by a braai on the paddle steamer moored outside Cruise Café, the prize-giving ceremony and an indoor putting competition.

At first light on Saturday morning, the first golfers teed off at Knysna Golf Course with the last of that day's 191 players finishing in dusk more than 10 hours later. They were greeted by the Marimba Band of the Sinethemba Youth Development Centre, a Rotary Club of Knysna project, and various delicious, wholesome soups prepared by the Rotary Anns.

On Sunday the golfers moved to the Pezula Golf Course where, at tee-off, they were presented with a tot of sponsored Bells whisky and milk to help counteract the morning chill. Three Knysna pipers later gave a stirring display of one of Scotland's best traditions during the afternoon's prize-giving . "The local group has initiated a youth development programme for budding pipers with the support of Rotary Club Knysna. Ten chanters, ten pairs of drumsticks and ten copies of a booklet, Learn to Play the Bagpipe, had been donated by Bob Shepherd (former Pipe Major RT Shepherd MBE) of the Rotary Club of Cowdenbeath. He had responded to a circular by the D1010 District International Service chair, Ken Patterson after Rotarian, Dereck Wheeldon from Knysna had written to both Scottish Districts requesting assistance," explained Klews.

Klews added, "Throughout the weekend Rotary was very much in evidence with Rotary banners, feathers and a great number of Rotarians dressed in smart shirts and caps." Sponsors had the opportunity to present some of their products on and around the golf courses making a colourful display.

"All the caddies at Knysna Golf Club were smiling on Saturday!" exclaimed Klews. "Thank you very much Rotary," were the words of Trevor Quine, marshall at Knysna Golf Club, when he took Klews' hand in both of his, after the prize-giving at Pezula Championship Course had been completed late on Sunday afternoon.

"He did the same on Saturday, when Knysna Golf Club had been the venue, as every Caddy had been able to work that day, some of them even twice, and caddy tips had been generous," smiled Klews.