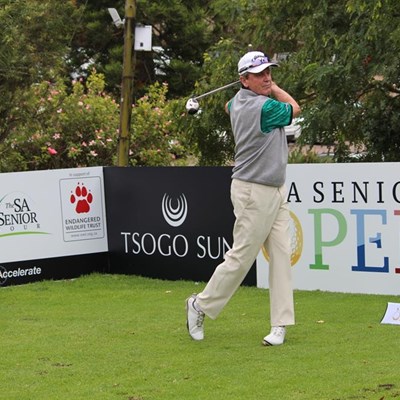 Winner of this year's SA Senior Open Mark McNulty proved his mettle during the tournament, which took place at the Plettenberg Bay Country Club between April 4 and 7. Photo: Supplied
SOUTHERN CAPE NEWS - Despite it ending on a wet note, Plettenberg Bay hosted a successful SA Senior Open in which legendary golfers battled it out for the win.
The event – hosted by the Bitou municipality in association with the Endangered Wildlife Trust – started on April 4 and ended on April 7, and golfers such as Fulton Allem, Mark McNulty, James Kingston, John Bland, Hugh Baiocchi, Chris Williams, Bobby Lincoln, Dennis Watson and Rodger Wessels took each other on at the Plettenberg Bay Country Club.
These legends competed for the SA Senior Tour’s (SAST) biggest prize purse of R500 000 in 20 years.
After two days of near perfect weather, apart from the expected coastal wind, the rain arrived on the final day of play.
Despite the less than ideal conditions McNulty proved his mettle as a golfer. Leading by six from Kingston going into the final day, McNulty had a challenging start. He dropped shots on three and four, while Kingston birdied two, three and seven, after a bogey on the first they suddenly were making the turn just two shorts apart.
McNulty, however, responded to the pressure and followed up with birdies on 10, 12 and 18 while Kingston went level par for the final nine.
That meant McNulty secured the SA Senior Open Championship title by five shots.
Wessels, who had started the day eight shots behind the leader and two behind Kingston was level par going down the final stretch, but rolled in three birdies in the last three holes to close with 69 and finishing eight-under for the tournament – only one behind Kingston.
Neville Clarke from SAST said having had some of the top players participate in the open meant that it brought “significant prestige and interest to the SA Senior Open”.
The tournament was a 72-hole stroke play competition with a pro-am teams event on the first two days. About 72 professionals and qualified amateurs teamed up with 72 amateurs that enter the teams’ event for the first two days.
'We bring you the latest Plettenberg Bay, Garden Route news'