Joy and heartbreak for GolfRSA six in Scotland

Six GolfRSA National Squad players made the top 64 in the 123rd Amateur Championship with five advancing to the third round at Royal Aberdeen in Scotland; credit GolfRSA. Left to right: Luca Filippi, Malcolm Mitchell, Therion Nel, Jovan Rebula, Matt Saulez (eliminated in round 2) and Wilco Nienaber.

GOLF NEWS - There was jubilation in the GolfRSA National Squad camp after five of the six starters made the top 32 in the 123rd Amateur Championship on Wednesday, but the excitement was crushed as soon as the third round draw was published.

South Africa’s reigning number one Wilco Nienaber continued his dominance when he routed Niclas Weiland from Sweden 5 & 4, but victories for Malcolm Mitchell, Jovan Rebula, Luca Filippi and Therion Nel came at a price.

Mitchell will face compatriot Rebula, while Ernie Els and Fancourt Foundation duo Filippi and Nel will duel each other for a top 16 spot.

“What can you do; the draw is the draw,” said Auburn University student Rebula.

“We knew this would happen. We are a tight group and it really sucks for South Africa, but that’s how the chips fell for the squad. The consolation is that at least two members of the GolfRSA National Squad will fight for a top eight spot.”

Nienaber was never troubled in his match against Weiland.

“It rained when we got to the course and the wind was blowing in a different direction,” said the 18-year-old Bloemfontein golfer, who became the first South African to win the 36-hole stroke play qualifier since it was introduced in 1983.

“The front nine played into wind and it was tough. I was 2-up through three, but he won the fourth hole. I took the fifth with a par and he won six with a birdie. I won nine with a par to turn 3-up and nearly aced 11, but I made the birdie putt to go 4-up.

“I went 5-up with a birdie at 12 and parred the next two holes for the win. It was really satisfying to win the first one, because you can so easily get it wrong and fall out in the first round. I played nicely to stay in the competition and I hope to make it three for South Africa in the top eight today.”

Compatriot Matt Saulez did hole out at the par three 11th to record the first hole-in-one of the championship.

The ace helped the KwaZulu-Natal to square his match against Benjamin Jones, but the Englishman rallied with a couple of birdies down the back nine to win 2-up.

Rebula, who was ranked 196th in the World Amateur Rankings at the start of the week, eliminated Billy McKenzie from England 2 & 1. The George golfer expects a tough match against Mitchell, who ousted Australian Ben Ferguson 2-up.

“Malcolm was down in his match against Ferguson after three holes, but took the lead after six and we were both 2-up through the turn,” Rebula said. “He is a proper fighter. He has a good match play record, because he never lets up. I reckon we’ll go the distance. It’s should be a great fight.

Filippi from Milnerton Golf Links strengthened South Africa’s chances when he defeated Stefano Mazzoli from Italy 3 & 1. He also expects to a tough clash against Nel from Bloemfontein, who beat

Liard Shephard from England at the 19th hole.

“Therion holed a huge putt at 18 to extend the match and then he rolled an 18-footer to win the match,” said Filippi. “He definitely won’t go down without a fight. The matches between the GolfRSA National Squad players are going to be spirited, because no-one is going to give an inch. We all want to reach the top eight. But we’ll still celebrate together, irrespective of the results.”

World number five Victor Hovland from Sweden – the highest ranked player in the field – also eased into the third round with a 5 & 4 win over Germany’s Lukas Euler, while world number seven Matthew Jordan from England fought back from 4-down to beat Finland’s Matias Honkala at the 20th hole. 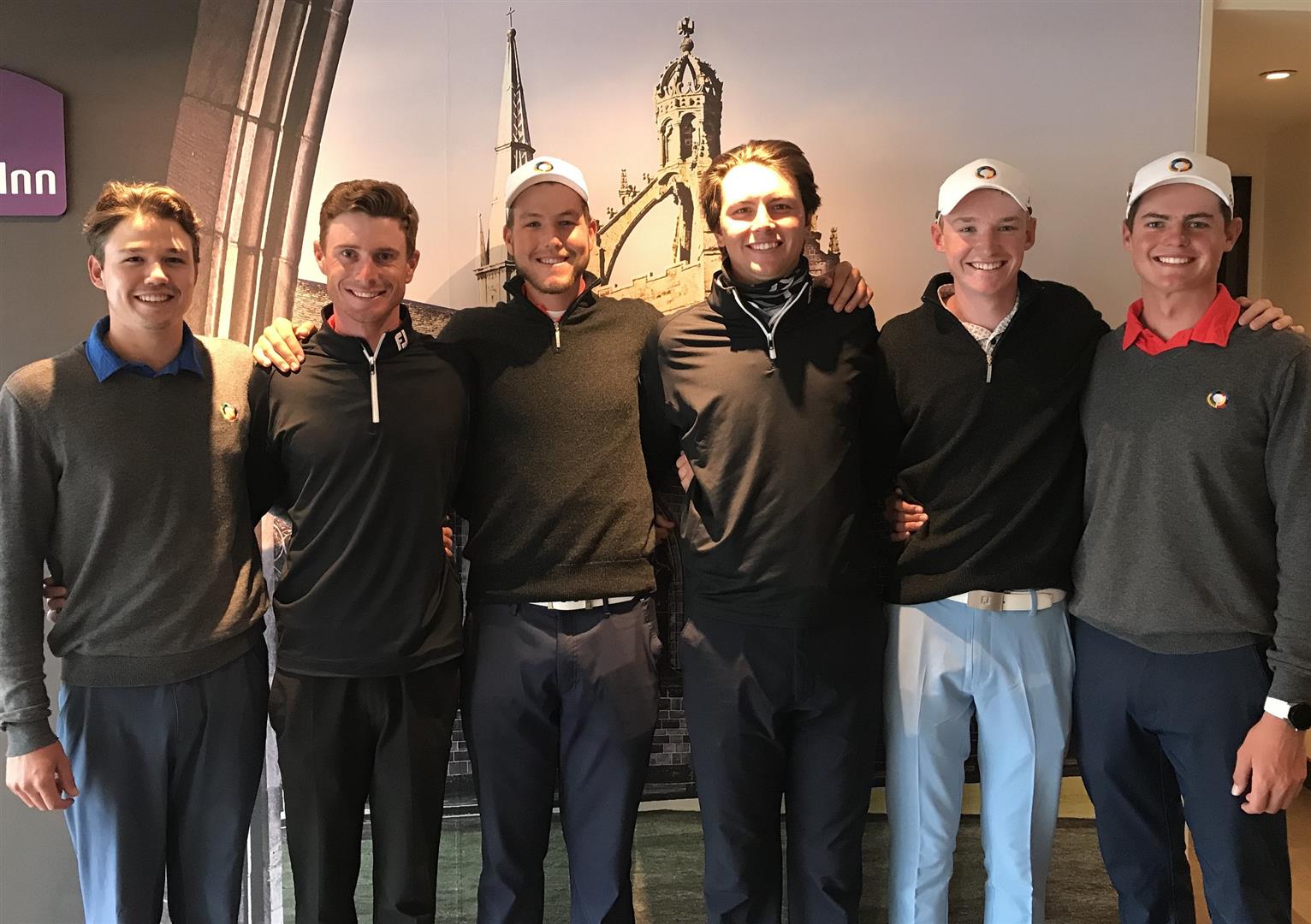 Six GolfRSA National Squad players made the top 64 in the 123rd Amateur Championship with five advancing to the third round at Royal Aberdeen in Scotland; credit GolfRSA. Left to right: Luca Filippi, Malcolm Mitchell, Therion Nel, Jovan Rebula, Matt Saulez (eliminated in round 2) and Wilco Nienaber.

Written and released by Lali Stander on behalf of GolfRSA.