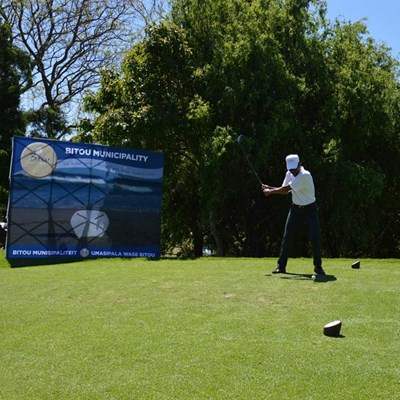 Bitou mayor Memory Booysen tees off at the Plettenberg Bay Country Club. Photo: Supplied.
PLETTENBERG BAY NEWS - Bitou mayor Memory Booysen and golf enthusiasts teed off for a good cause last week when the Annual Mayoral Charity Golf Day was hosted at the Plettenberg Bay Country Club.
Every year Booysen hosts the event in aid of his bursary fund supporting education and skills development in the Bitou area.
At this year’s event, which took place on Friday, October 16, Booysen said that every year at the end January, the municipality hosted a bursary and grant-in-aid awards ceremony which is funded through events such as the golf day.
“The money allocated to the Mayoral Social Relief and Bursary Fund is there to aid enthusiastic and prospective students and to give capacity to local non-governmental organisations, non-profit organisations and community-based organisations in their endeavours to embark on community projects,” Booysen said.
He added that on January 29 this year, bursaries to the value of R341 000 had been awarded to 62 deserving students.
Booysen commended Bitou residents for making the initiative such a success.
“I would like to take this opportunity to thank everyone from the organisers, sponsors to the golfers on the day and everyone else who has been so supportive of this event.”
Brian Edwards facilitated the auctioning of various items to increase the funds raised.
Municipal spokesman Howard Swartz said the window period for the bursary and grant applications would start on October 29 and close on December 31.
Application forms will be available at municipal libraries and from the municipality’s website, www.bitou.gov.za.
ARTICLE: YOLANDE STANDER, KNYSNA-PLETT HERALD - CORRESPONDENT
'We bring you the latest Plettenberg Bay, Garden Route news'