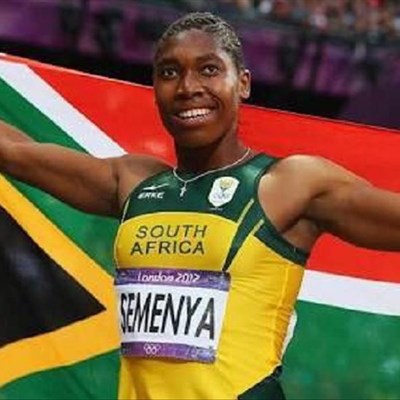 Caster Semenya elated after her run.

This is the first time the 800m Olympic champion has raced the 1500 event at international level and Semenya was the first to admit her inexperience was evident in the manner in which she tackled the race.

The 26-year-old dropped well back and was left with a massive gap to close in the final metres of the race, but her signature kick stood her in good stead to sneak in for the bronze medal ahead of home favourite Laura Muir.

“I made a mistake and we had to pay for that. But we’re happy with the medal. We couldn’t have asked for more. We know we have a kick so we just had to hold on until the finish line,” said a thrilled Semenya afterwards.

“Letting them stretch out for long, that was the biggest mistake. I tried to keep up the pace but then realised in the last 300 that I was far back so I had to pay the price.

“But I’m quite happy with the performance. For me it’s a dream come true. I always believed in myself. I knew I would win a medal.

“And congratulations to Faith and Jenny – they moved like rockets,” added Semenya, who will begin her quest for 800m glory in the heats on Thursday.

Earlier in the evening, Wayde van Niekerk and Akani Simbine made no mistakes in safely booking their spots in the semfinals of the 200m. But there was heartbreak for another of SA’s junior athletes, Clarence Munyai. He thought he had also safely qualified after finishing third in his heat in 20.19, but was later disqualified for stepping out of his lane. A

There was some surprise when Botswana’s Isaac Makwala was a no-show for his 200m heat. Like Van Niekerk, Makwala was supposed to be contesting both the 200 and 400m. Under IAAF rules, he will need to produce a medical certificate for pulling out of the 200. If not, he will not be permitted to contest the 400m final. Initial reports suggested the Botswanan was suffering from food poisoning – in which case, should he recover in time, he can line up for Tuesday night’s final.

Simbine was pleased with his performance. “The 200 for me is a more enjoyable race because I don’t have as much pressure as the 100,” he said after his race. “I always go into the 200 thinking I will just run and see what happens. I don’t put so much expectati on on myself and my body. It’s just running and seeing what I can put out.”

As for the prospect of once again having two South Africans on the podium in London, Simbine, who has been struggling with a hip niggle in London, added: “Let’s just hope and see what happens. I’m just hoping to make it through each round and finish off healthy. That’s the most important.