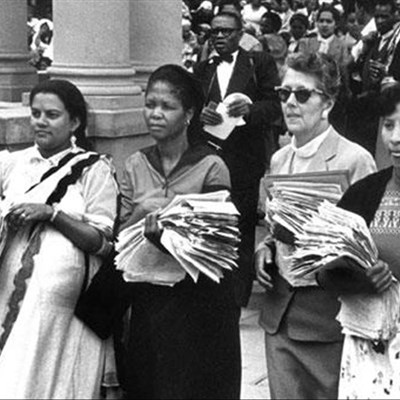 Marchers delivering the petitions with over 100 000 signatures at the Union Building in 1956. Photo found on internet.

NATIONAL NEWS - National Women's Day next Wednesday 9 August, commemorates the day in 1956 when thousands of women marched to petition against legislation that required African women to carry a 'pass' which gave them permission to be in an urban area to find work.

In the early 1950s only black men were required to carry passes. In 1952 the National Party government announced that black women would also have to carry passes, but the Government did not begin issuing permits to women until 1954.

The idea of a march was raised at a meeting of the Federation of South African Women (FSAW) in Johannesburg in 1955 where a suggestion was made: "Let us go to Pretoria ourselves and protest to the Government against laws that oppress us." The FSAW, a broad-based women's organisation, was launched the previous year under the leadership of Helen Joseph, Lillian Ngoyi and Amina Cachalia, who formed the steering committee.

On 9 August 1956, 20 000 women of all ethnic groups, outraged about the restrictions, marched to the Union Buildings in Pretoria in protest against the pass laws. They pleaded with government to change these policies by handing over petitions containing more than 100 000 signatures.

The marchers stood in silent protest outside the office of the Prime Minister, J.G. Strijdom, at the Union Buildings for half an hour and then sang a protest song which was composed in honour of the occasion: Wathint'Abafazi Wathint'imbokodo! (You strike a woman, you strike a rock!)