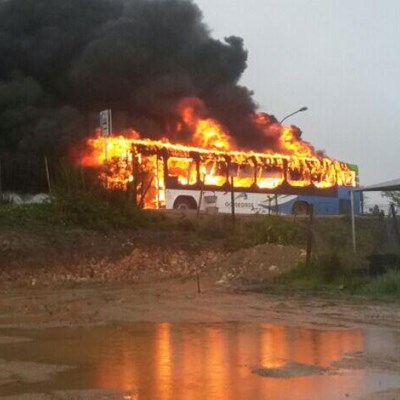 A GO GEORGE bus on a trial route in Thembalethu in the early afternoon was the spark that set off a chain reaction of arson attacks against GO GEORGE buses all over town.

A GO GEORGE bus with staff members on board was pelted with stones and taxis blocked the road into Thembalethu.

The police intervened and the bus was taken to Thembalethu police station.

Shortly afterwards tyres was set alight and within minutes the first bus went up in flames in Nelson Mandela Boulevard opposite the Business Park.


In the next hour fire fighters rushed from one arson attack on a bus to the next as police crisscrossed the town looking for culprits trying to prevent more attacks. More buses were set alight in Cradock Street, in Nelson Mandela Boulevard and at the Garden Route Mall.
Click here for more photos.


Reports that the Shoprite in Thembalethu is also burning are unconfirmed as the entrance to the township has been closed.
The George municipality says GO GEORGE passengers are safe, but have suspended all GO GEORGE services until the situation has been stabilized.
The protestors, mostly taxi drivers, demand that the GO GEORGE negotiations be reopened. This demand has been rejected by the provincial department of Transport and other role players.
Watch a video below now.


The spokesperson of the George United Taxi Drivers Cornelius Esau, said there are many more protests to follow. "We don't want to see another GO GEORGE bus in Thembalethu."
It seems that no taxis are running either and thousands of pedestrians can be seen making their way home in the rain on foot.