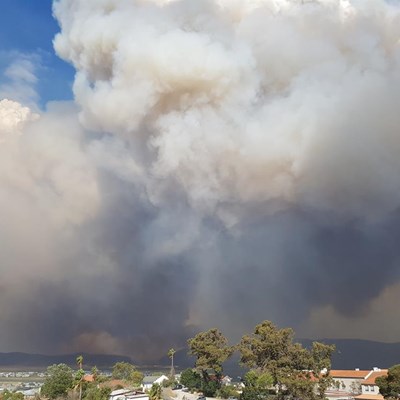 A bomb seemed to have exploded over Knysna on Wednesday, June 7 when the fires broke out. Photo: www.ellephotos.co,za
NATIONAL NEWS - The SANParks Manager for Planning at the Garden Route National Park, Len du Plessis, says as there were multiple fires in the Garden Route, it is difficult to confirm the causes, although speculation is rampant.
"Spontaneous combustion of fires that occur every 150 years, is one theory scientists have. But this is but one possibility. Investigators must get to the bottom of the causes of these multiple fires."
The previous Great Fire similar to these recent fires was back in 1869. "Then fires sprang up all over the Southern Cape and burnt from Riversdale right through to Uitenhage. "Here in the Garden Route, fire shapes the landscape," he says.
Du Plessis was responding to a preliminary report released by Stellenbosch-based Eskom engineer and energy expert, Dr Wallace Vosloo whose home in Elandskraal, between Sedgefield and Rheenendal, was one of the first to be razed to the ground. With his home many prized Great Trek artifacts also went up in flames.
Vosloo alleges that a smouldering underground fire caused by lightning on 12 April in Elandskraal started burning out of control on Wednesday 7 June fueled by gale force winds - claiming the lives of the Johnston family of three who burnt to death at their house as they tried to flee.
He says that the Knysna Municipality as well as the Sedgefield and Knysna Fire Brigades were warned about the threat a month in advance and numerous times since, but did not deem it necessary to put out the smouldering undergrowth with an aerial water bomb.
Fires shape landscape
However, Du Plessis does not think that the fires to the west of Knysna could have been caused by the smouldering bush in Elandskraal. He says the Garden Route has a unique ecosystem that causes spontaneous combustion.
"The area is like the inside of a box where the perfect combustible conditions are created over time. Low humidity, dense undergrowth, alien plants, dry plant material coupled with warm winds caused by a low pressure system create the ideal conditions for runaway fires.
We just need one spark created by a falling rock for the entire inside of the box to eventually explode in flames. The current micro climate was conducive to start the many fires all across the district." According to SANParks this theory must be revisited by scientists and investigators in the weeks to come.
Fire paths
Du Plessis says it is too soon to blame anyone.
"What we also know is that the topography of the land determines the fire paths. Everything outside of the indigenous forests are in the way of the fire paths. Three hundred years ago everything would have burnt except the indigenous plants - and that's why the indigenous areas exist, they don't grow in the natural fire paths. Today we have built homes and other structures in these paths."
He says all that residents and authorities in the Garden Route can do is to mitigate the risk. "We need a fire-wise campaign and reduce the carpet of undergrowth - the so-called fuel. Alien invasive plants and trees should be controlled."
Satellite proof
Vosloo, on the other hand, says he has satellite proof that the fires originated where the smouldering forest smoke was seen in Elandskraal, rapidly spreading to neighbouring areas like Rheenendal, the bush around the roads leading to Brenton- on-Sea and Buffalo Bay, jumping the Knysna Heads causing havoc in the Knysna municipal area.
He does however agree with Du Plessis that conditions in the region were ideal to cause fires of this magnitude.
"The Elandskraal fire was not the only cause of the disaster. Many other factors came into play and other independent fires also flared up. A fire needs oxygen, fuel and heat. In this instance we had it all with the gale force winds providing the oxygen that was lacking before 7 June. It is exactly for this reason that we need to take precautionary action while we still can."
Empower fire brigade
He says fire officials should be empowered to make the necessary lifesaving decisions.
"If a chopper needs to be sent out to water bomb smoke in the forest, forget about the expense and do it. In this case it wasn't done and lives were lost. We don't want to point fingers - it's already too late, but this was gross negligence. If a water bomb had extinguished the smouldering Elandskraal fire in April or May, this disaster would have been prevented."
The wind conditions were unfavourable for helicopters to fly on that fateful day of 7 June and ground teams had to go in. Vosloo hopes the fires help people understand the dangers and convinces the powers that be to prevent similar fires in future.
"Empower the fire brigades and provide them with the necessary resources to act when they need to act. Eskom often warns municipalities, parks and forestry about dangers. Please listen and use the technology available. This must never, ever happen again."
Beautiful spring
Du Plessis says although it is a costly human and infrastructure tragedy, from a bio-diversity perspective the fires will have a positive impact. "From a nature managing viewpoint it is not a disaster. Animals are better adapted than humans to survive.
The Knysna indigenous forest did not burn. The plantations did. This coming spring, the fynbos and veld will be beautiful. It will be a kaleidoscope of colour."
The night sky was a sight that most inhabitants of Knysna will never forget, but wish they could. Photo: www.ellephoto.co.za
Seen from the water front is the huge smoke cloud that started to cover the town on Wednesday when the fires started. Photo: Mark Taylor.
ARTICLE: ILSE SCHOONRAAD, GEORGE HERALD EDITOR
'We bring you the latest Garden Route, Klein Karoo, Hessequa news'