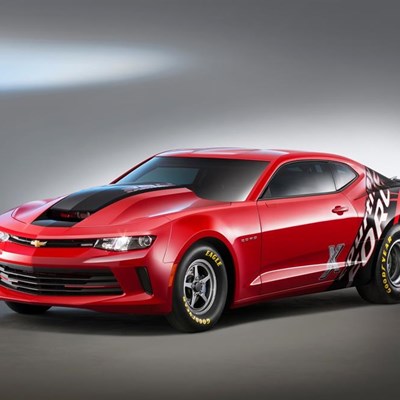 One of only 69 of the factory race cars to be built in 2016.
MOTORING NEWS - Chevrolet will build just 69 examples of its 2016 COPO Camaro the first one off the production line was sold for charity at the Barrett-Jackson auction last month. The proceeds of $300 000 went to the charity United Way.
Chevy unveiled its 2016 COPO Camaro during last year's SEMA show. It teamed up with drag racer Courtney Force to help design the first of the 69 cars to make it really special.
The fire-breathing monster features a bright red exterior, custom graphics and red accents in the grille.
Under its carbon fibre hood is a 5,7-litre, V8 with a Whipple 2,9-litre supercharger. Inside is a chrome-moly roll cage plus lightweight racing bucket seats personalized with the COPO logo and Courtney Force's signature.
There is also a floor-mounted shifter for the THM-350 automatic transmission. The 2016 COPO Camaro has been designed for NHRA's Stock and Super Stock Eliminator classes. Chevrolet offers a variety of performance options for the car including additional engines. The 2016 COPO Camaro, the first based on the all-new, sixth-generation Camaro, has also been designed to accept General Motors Company's new LT-based V8s.
Every COPO Camaro is built by hand starting with production hardware, including the same body in white used for production models. And in case you were wondering - the COPO Camaro takes its name from the Central Office Production Order system used in the 1960s for fleet managers to order unusual combinations of options.
'We bring you the latest Garden Route, Klein-Karoo, Hessequa news'