MINI - the best of both worlds 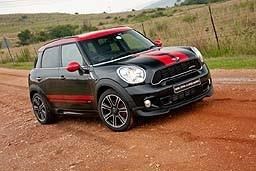 This model offers more space and a more family-orientated car.
MOTORING NEWS - The MINI brand stands for fun and when you add the John Cooper Works (JCW) nomenclature to the back of the car, even more so.

By default, their new model launches follow suit and provide for a great day out of the office. Although I am not a big fan of the MINI Countryman, I think I get what MINI is doing by offering this model, as do the owners of a Countryman - more space and a more family-orientated car.

I just prefer my MINI a little smaller, traditional and selfish - like it should be.

At the media presentation, we were told the JCW version will only come in all-wheel drive and offer a six-speed auto box for the first time to go with the standard six-speed manual offering - two things I think should not be found on a JCW derivative of any MINI.

Even with this in mind, I took to the launch drive with an open mind. After all, this is still a potent machine that features a new generation direct fuel injection 1,6L turbocharged engine that produces a nice 160kW and 280Nm of power and torque, which is good enough on paper to see the Countryman JCW get to 100km/h in 7,0 seconds for both auto and manual derivatives, while stopping at 225km/h and 223km/h.

As to be expected, MINI claim low emissions of 172g (automatic 184g) carbon per km and fuel consumption averages of 7,4L (7,9L auto) per 100km. The Countryman JCW certainly felt punchy on the trot. I didn’t drive the auto. Making liberal use of the manual gearbox was a treat on the twisty roads in and around the Hartebeespoort region.

SUSPENSION
Although the ALL4 all-wheel-drive system distributes drive seamlessly between the front and rear axle using an electromagnetic centre differential, it was these same roads that revealed a suspension set-up that did not like ruts and ripples, especially mid-corner.

Pick a line and all would be good until you hit a rut or ripple. Then the car would skid around and force you to make quick adjustments to your steering angle and input to maintain the direction in which you were originally hoping to go. And if you were driving really quick, this problem got worse.

Thankfully, you do have a DSC (Dynamic Stability Control) system that includes DTC (Dynamic Traction Control) should you really run out of talent.

On smooth tar there was no such problem. The Countryman JCW morphs back into a predicable hot hatch with a trendy interior and space to match.

Talking of smooth tar, our drive took us to the Gerotek vehicle test facility west of Pretoria. Here we were introduced not only to the very limited and exclusive MINI JCW GP, we were also treated to a spin with the Dakar winning legend Stéphane Peterhansel in a Dakar MINI.

What an experience! After only four minutes in the Dakar MINI, I have a world of new respect for Dakar competitors who do this for days on end at 110 per cent.

Now, back to the JCW GP that is more up my alley. If you're going to drive a JCW MINI, it needs to be quick to do battle with all the other good hot hatches out there. The bad news is that we're getting only 30 of the fastest MINI's ever built - it lapped the Nürburgring-Nordschleife in 8 minutes and 23 seconds - and all are already spoken for by eager customers in SA.
Exclusivity is the name of the game here and for this you have an exclusive power train, chassis and aerodynamics technology inspired directly by motorsport.

CORNERS
Its twin-scroll turbo engine produces the same quoted numbers as the Countryman at 160kW and 280Nm, but generates remarkable elasticity out of the corners thanks to reduced weight over the normal MINI.

It also features a specially developed, adjustable race suspension that allows for precise and very controllable handling.
Well, like you would expect it did on the smooth tar of the Gerotek dynamic handling circuit. I am not so sure it would like the rough stuff, but then not too many would buy this limited edition car for carting the family around the countryside.
This car has the ability to humble many a quicker street car at the track and is the closest you can get to owning a Super Series production race car at a fraction of the price.

Of course, you would be dilly if you think any production MINI can come close to the MINI race cars we see at the tracks today, but that is a story for another day.

Wrapping up the dynamic package, you have the visual impact of the JCW GP.
Large front and rear aprons, striking side skirts and a bespoke roof spoiler are complemented by a newly developed rear diffuser. This optimises airflow around the under body.

The interior of the MINI JCW GP also contributes to the car’s racing feeling. With the rear seats removed, it focuses unashamedly on the needs of the driver and co-driver – like it should.
I loved the MINI JCW GP and, even with my MINI Countryman issues, I have to concede that MINI still offers plenty for the enthusiast and young family alike.

67 %
No: It is the municipality's job to keep Knysna clean.