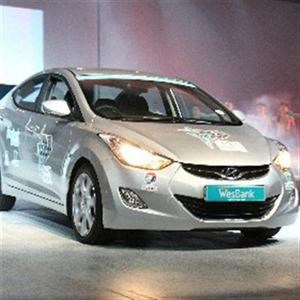 The star of the evening - the Hyundai Elantra was announced as 2011 SA Car of the Year by the SA Guild of Motoring Journalists and main sponsor WesBank. The supporting sponsors were Total and Hollard Insurance.
MOTORING NEWS - The Hyundai Elantra 1.8 GLS was a popular winner with the audience of motoring journalists at the Car of the Year awards ceremony held at Gallagher Estate last week. The annual competition is run by the South African Guild of Motoring Journalists (SAGMJ) and WesBank.

It is the first time that a Korean car has been awarded the South African Car of the Year. Hyundai Automotive SA had been knocking hard at the door for the past two years. In the 2011 competition Hyundai had two finalists - the ix35 and Sonata - and the i20 was a finalist in the 2010 Car of the Year competition.

The Elantra is an elegant medium luxury sedan thanks to the "fluidic sculpture" styling and with driving dynamics to match. It was regarded as a very strong contender for the title from the start.

All the finalists were comprehensively put through their paces at the Gerotek vehicle test facility outside Pretoria.

The COTY jury are given an opportunity via this extensive evaluation process to each allocate 25 points in total to no `not fewer than three of the finalists. These scores are open to scrutiny after the winner is announced to demonstrate transparency.

The competition is about automotive excellence and the winning vehicle must score highly in its own class across a variety of categories including those which reflect value for money, safety, dynamics, technology and aesthetics.

This has been a great year for Elantra: In January, at the Detroit Motor Show, the Elantra was announced as North American Car of the Year and it also won the overall prize in the Canadian Car of the Year competition. "We are extremely proud of the recognition that a world-class product such as the Hyundai Elantra has received from the South African Guild of Motoring Journalists," said Alan Ross, managing director of Hyundai Automotive South Africa, after receiving the Car of the Year trophy.
"This award and the fact that we had no less than two finalists in the previous competition, is confirmation of the giant strides that the Hyundai brand has made locally and globally.

It is also recognition of the quality and emotional appeal that the Hyundai products have developed."

Since its South African launch in August 2011, the new Elantra has quickly become a leader in its segment offering luxury, quality and affordable yet exciting motoring.

Read more about: Hyundai Elantra SA Car of the Year

63 %
No: It is the municipality's job to keep Knysna clean.