LIFESTYLE NEWS - "Anything you can do I can do while bleeding," read one defiant poster at a recent women's march in Pakistan, while another demanded: "Keep your dick pics to yourself". Then came the backlash, including rape and death threats.

The posters were just part of the colourful spectacle as tens of thousands of women took to the streets for the second annual Aurat (Women) march in major cities across Pakistan, marking International Women's Day on March 8.

But this year the slogans caught the attention of the media, many of whom showcased them online, while a handful of the most provocative went viral - igniting weeks of outrage, with shocked organisers reposting a slew of violent threats.

The uproar has provoked a rare and at times acrimonious debate on women's rights and cultural values in a conservative Muslim country that has, until now, been largely unconcerned with the global #MeToo movement.

Celebrities and television personalities have weighed in, and a retaliatory "Men's March" was even organised in Karachi, though reports suggest just two showed up.

One Karachi cleric, offended by a poster that announced "My body, my choice", used twisted logic to claim that men, also, have agency over their bodies - therefore they have a right to sex with whomever they want. 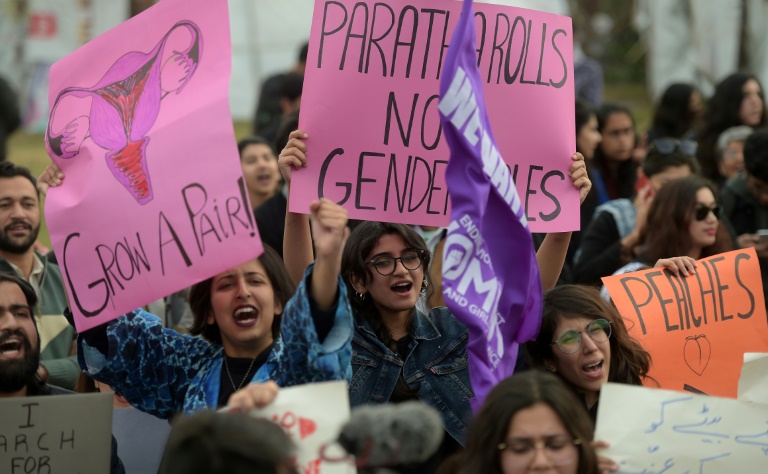 Marches were held across Pakistan to mark International Women's Day on March 8, with some slogans sparking outrage.

"My body my choice ... your body your choice ... Then men's body men's choice ... They can climb onto anyone they want," he argues in a video which swiftly went viral, with tens of thousands of views.

Many of the informal group of activists behind the march said they had expected a reaction, but were taken aback by its ferocity.

"The level to which they took offence, to the point of giving death threats to people who were the organisers ... is too much," says Lubaina Rajbhoy, a graphic designer whose posters evoking Communist revolutions became emblematic of the march.

The backlash against the slogans, Rajbhoy said, "shows a height of intolerance in our country, which again is one of the purposes of the march".

'Equal rights for all'

Women have long fought for basic rights in Pakistan, where activists say men commit "pervasive and intractable" violence against them.

Much of society lives under a patriarchal, outdated code of so-called "honour" that systemises the oppression of women who defy tradition by, for example, choosing their own husband or working outside the home.

Hundreds of women are killed by men in Pakistan each year for "honour".

As with women's movements elsewhere, the uproar was partly fuelled by fears "feminism" means hatred of men - "which is not true at all", says organiser Leena Ghani. 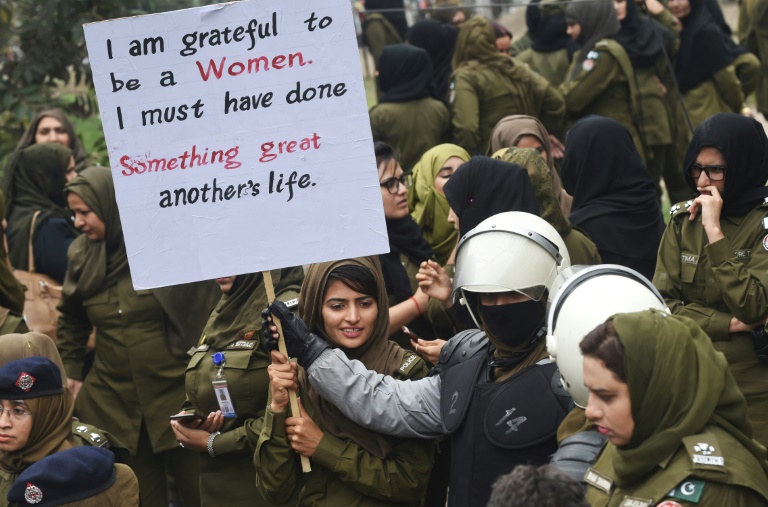 Pakistani policewomen at this year's Women's Day march in Lahore. The ensuing uproar has provoked a rare debate on women's rights in conservative Pakistan."We are asking for ... equal rights for all," she said. "To be honest, everyone is affected by patriarchy."

But the signs also invoked what many saw as the encroachment of elitist and Western cultural values on a post-colonial, Islamic society.

The slogan "Keep your dick pics to yourself" drew particular fire, with many angered more by the explicit language than by the spectre of sexual harassment it raised.

And signs promoting divorce and a woman's rights in marriage were perceived as an attack on Pakistan's social structure, in which traditional marriages play a central role.

Ride-sharing app Careem caught part of the backlash when it released a lighthearted ad two weeks later showing a runaway bride, the caption reading: "If you want to run away from your wedding, book a Careem bike!"

Critics filed a legal petition against the ad, calling it an "unethical promotional campaign".

Television host Madiha Masood was among those publicly criticising the march, suggesting it was a project driven by foreign powers - a common conspiracy theory in Pakistan. 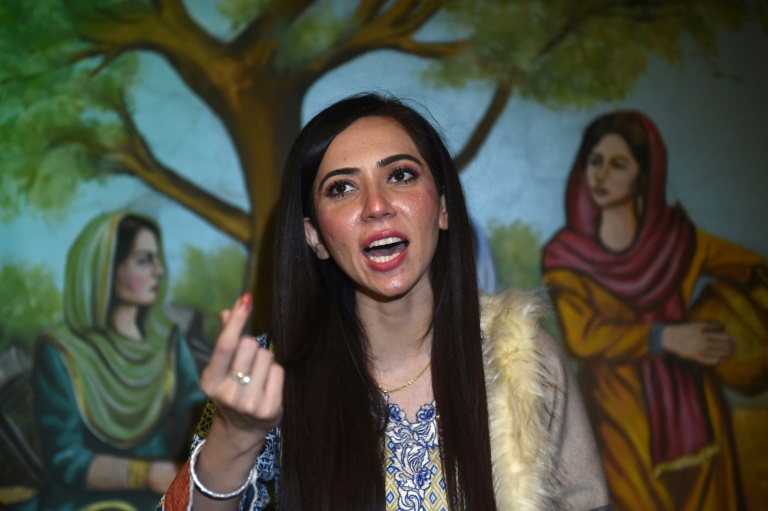 "I will not encourage my daughter to depict inappropriate hand gestures, hold a cigarette in her fingers and say, 'My time has come'. I'm very sorry, I wouldn't want such a daughter," she told AFP.

Another high-profile critic was Pakistani feminist icon and poet Kishwar Naheed, who reportedly said she believes feminists should keep their culture and traditions in mind so as not to go astray like "jihadis" - much to the surprise of many who had looked to her for inspiration.

For the marchers, criticism of the posters is a distraction - though the designer Rajbhoy noted the controversy is now being broadcast to women all over the country.

"It's important for them to see that ... there is this group of women that are actually coming out of their homes and marching, and perhaps they wish to participate in it in the future."