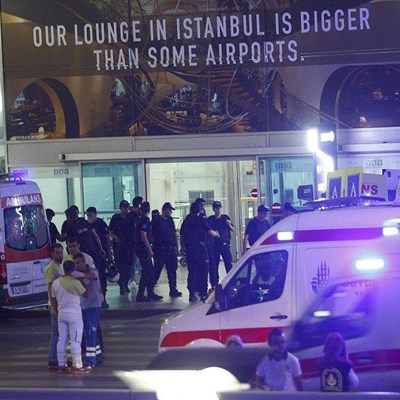 The attack on Europe’s third-busiest airport was the deadliest in a series of suicide bombings this year in Turkey. Image: twitter.com
INTERNATIONAL NEWS - Turkish investigators pored over video footage and witness statements on Wednesday after three suspected Islamic State suicide bombers opened fire and blew themselves up in Istanbul’s main airport, killing 41 people and wounding 239.

The attack on Europe’s third-busiest airport was the deadliest in a series of suicide bombings this year in Turkey, part of the US-led coalition against Islamic State and struggling to contain spillover from neighbouring Syria’s war.

President Tayyip Erdogan said the attack should serve as a turning point in the global fight against terrorism, which he said had “no regard for faith or values”.

Five Saudis and two Iraqis were among the dead, a Turkish official said. Citizens from China, Jordan, Tunisia, Uzbekistan, Iran and Ukraine were also among the 13 foreigners killed.

One attacker opened fire in the departures hall with an automatic rifle, sending passengers diving for cover and trying to flee, before all three blew themselves up in or around the arrivals hall a floor below, witnesses and officials said.

Video footage showed one of the attackers inside the terminal building being shot, apparently by a police officer, before falling to the ground as people scattered. The attacker then blew himself up around 20 seconds later.

The Dogan news agency said autopsies on the three bombers, whose torsos were ripped apart, had been completed and that they may have been foreign nationals, without citing its sources.

Broken ceiling panels littered the kerb outside the arrivals section of the international terminal. Plates of glass had shattered, exposing the inside of the building, and electric cables dangled from the ceiling. Cleanup crews swept up debris and armed police patrolled as flights resumed.
Read more on Eyewitness news.