INTERNATIONAL NEWS - Twenty-three bodies were recovered on Sunday after a small plane crashed on takeoff into a densely populated area of the city of Goma in the Democratic Republic of Congo, rescue workers said.

The dead are believed to include all those on board the plane as well as people on the ground.

Images from the scene showed plumes of black smoke and flames apparently from the burning plane as locals looked on.

The Dornier-228 aircraft had been headed for the city of Beni, 350 kilometres (220 miles) north of Goma when it went down in a residential area near the airport in the east of the country.

"There were 17 passengers on board and two crew members. It took off around 9-9.10 am (0700 GMT)," Busy Bee airline staff member Heritier Said Mamadou said.

One of the company's maintenance workers at the site quoted by news site actualite.cd blamed a "technical problem".

The plane crashed down in a densely-populated area of DR city Goma.

The precise number of casualties on the plane and on the ground was not yet known. 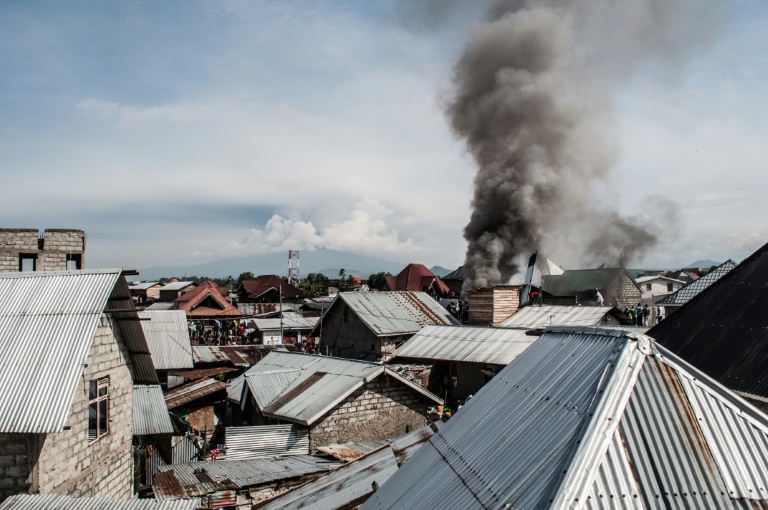 Last month an Antonov 72 cargo plane that was providing logistical assistance for a trip by DR Congo President Felix Tshisekedi and carrying eight crew and passengers went missing after taking off from Goma.

In September 2017, an Antonov cargo plane chartered by the army crashed near the capital Kinshasa, killing all 12 people on board.

The country's deadliest Antonov disaster was in January 1996 when an overloaded plane overshot the runway in Kinshasa and crashed into a popular market, killing hundreds on the ground.

Goma is the capital of North Kivu province. Beni, the plane's destination has been at the epicentre of an Ebola outbreak that has killed more than 2,000 people in the last year.