Japan's Emperor Akihito and Empress Michiko are leaving the stage.

INTERNATIONAL NEWS - When the 85-year-old Japanese Emperor Akihito steps down on April 30, it will be the latest in a string of historic abdications that have included the pope and several monarchs.

As medical technology improves and lifespans grow, the concept of a lifetime of duty is gradually being eroded and abdications are becoming increasingly acceptable and frequent.

Here are some other recent abdications.

Non habemus papam
On February 11, 2013, Pope Benedict XVI stunned the world with an announcement that he was stepping down due to ill health, the first pontiff to abdicate for medical reasons in 700 years.

In a speech in Latin at the Vatican, the 85-year-old German-born Benedict told cardinals that "due to an advanced age" his strength was "no longer suited to an adequate exercise" of his post.

Benedict, who suffered from arthritis and had a stroke while he was still a cardinal, eventually stepped aside on February 28, sparking an outpouring of emotion from the world's 1.2 billion Roman Catholics. 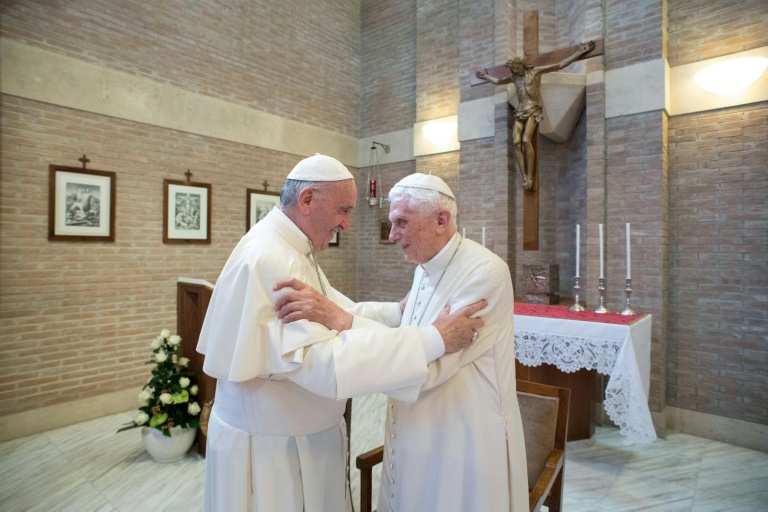 Pope Benedict XVI stunned the world when he stepped down out of the blue.

The only previous pope to step down because he considered himself unable to continue was Celestine V, a simple hermit elected against his will in 1294.

His decision to back out sparked derision and Italian poet Dante Alighieri famously condemned him in "The Divine Comedy" to spend eternity in hell's antechamber for his "cowardice" in making "the great refusal".

King of the Belgians

In July 2013, the "King of the Belgians" Albert II announced to his divided country that he would be stepping down, saying he felt too ill and frail to continue. 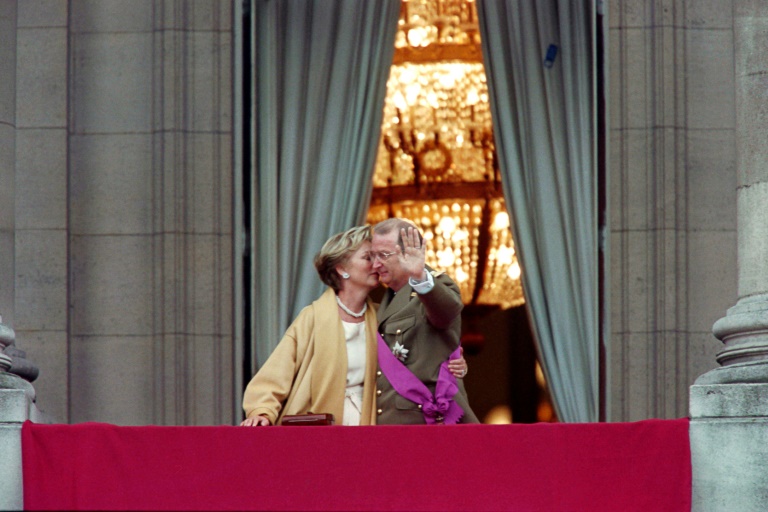 "I am at an age never attained by predecessors. My age and my health do not allow me to exercise my duties as I would like," said the then 79-year-old, after 20 years on the throne of the small European country.

It was the first voluntary abdication in the history of Belgium, which gained independence from the Netherlands in 1831.

The Belgian monarch plays a crucial role in fostering national unity in a country which is sharply divided between French-speaking Wallonia and Flemish-speaking Flanders.

'Trix': Queen of the Dutch'

Queen Beatrix of the Netherlands also stepped down in the abdication-heavy year of 2013, but the energetic and popular monarch did not abdicate due to ill health but rather because she wanted to pass the torch to her son Willem Alexander.

The then 74-year-old told the nation: "I'm not standing down because public service is too heavy for me, but because of the belief that responsibility for our country should be in the hands of a new generation."

Thousands of Dutch party-goers wearing orange suits, wigs and sunglasses, flooded the streets of Amsterdam to celebrate the handover of power to their first king in more than 120 years. 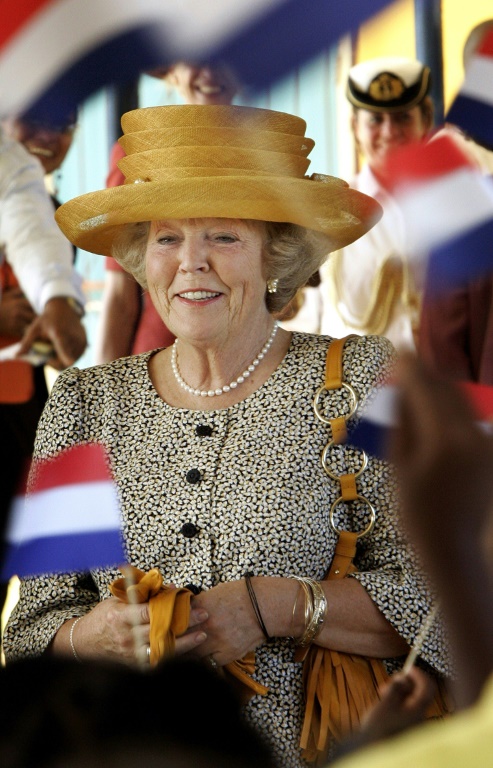 Carlos's reign in Spain
In June 2014, King Juan Carlos of Spain stepped down in favour of his son, bringing to a close a 39-year reign that won praise for guiding the country to democracy after the death of dictator General Francisco Franco in 1975 but also had its share of scandals.

Carlos walked with a cane after several hip operations but, like Queen Beatrix, justified his abdication by saying that "a younger generation deserves to step into the front line".

His reign was marred by a corruption scandal implicating the king's youngest daughter Cristina and her husband, and he outraged Spaniards in 2012 by going on a luxurious African elephant-hunting safari during a recession. 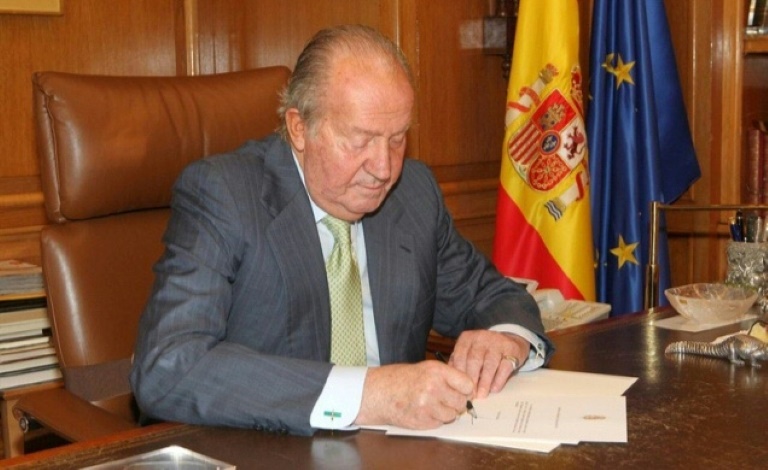 Spain's King Juan Carlos said he wanted to pass the torch to a new generation.

A rare Arab abdication in Qatar
Also in 2013, the emir of gas-rich Qatar, Sheikh Hamad bin Khalifa al-Thani, abdicated after 18 years on the throne - a rarity in the Arab world.

The emir, then 61, suffered from kidney problems but officials insisted his motivation for stepping down was not health-related but rather a determination to bring a younger leadership to the fore.

His son Sheikh Tamim, then 33, took over. 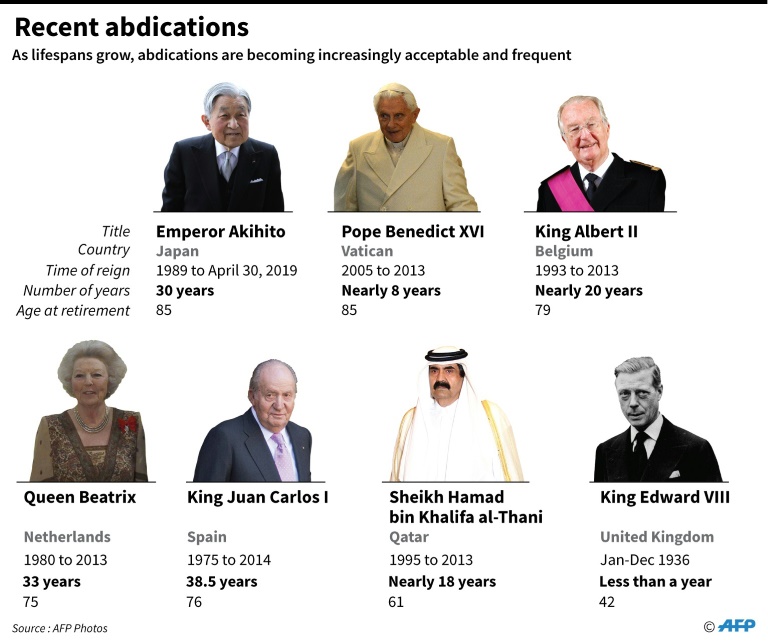