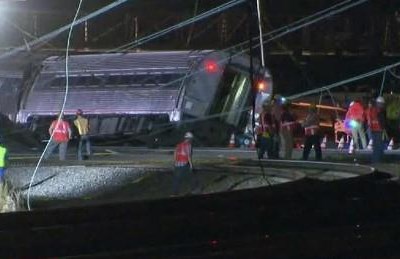 Photo: CNN
INTERNATIONAL NEWS - A passenger train has derailed in Philadelphia, killing at least six people and injuring more than 140 others, officials in the US city say.
Seven carriages including the engine of the Amtrak train bound for New York went off the track on Tuesday evening.
The country's most travelled stretch of passenger railway between New York and Washington was closed as investigators tried to determine the crash's cause.
More than 240 people were on board Train 188, officials said.
The National Transportation Safety Board said it was dispatching a team of investigators to the crash site on Wednesday.
Read the full story on BBC.