Mogadishu is regularly hit by attacks by the Shabaab, which has fought for more than a decade to topple the Somali government.

INTERNATIONAL NEWS - At least four people were killed, including a senior government official, when a car bomb exploded close to a checkpoint near Somalia's parliament in the capital Mogadishu on Wednesday, police said.

A plume of thick black smoke was seen over the city and witnesses said a number of vehicles were on fire.

Islamist group Al-Shabaab claimed the attack, after a rise in activity in recent days by the Al-Qaeda linked group which has seen it inflict mass casualties in Somalia and attack a US military base in Kenya.

"Explosives were packed in a vehicle which the security forces think was trying to pass through the checkpoint, but because he could not do that, the suicide bomber detonated it," said police officer Adan Abdullahi.

"Initial reports we have received indicate four people were killed and more than 10 others were wounded in the blast."

Bile Ismail, the manager of finances at the ministry for women and human rights, was among those killed, relatives and colleagues told AFP.

"We have indeed lost a brother and good friend in the blast this morning," Abdiqani Omar, the ministry's former director general, told AFP.

"He was sitting in the car waiting in line at the checkpoint when the blast occurred and his body (was) badly burned inside the car," he added. 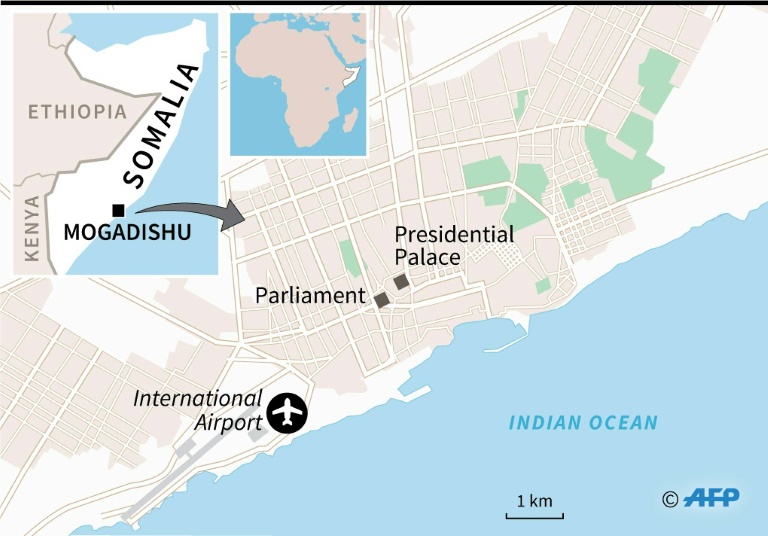 Map of Somalia's capital Mogadishu locating the parliament, near where a large explosion occurred Wednesday.

Abdirahman Mohamed, who was at a nearby grocery store when the blast occurred, said he saw several corpses.

"I saw the dead bodies of several people, some of them killed by shrapnel inside their vehicles. There was chaos... and ambulances reached the scene soon after the blast," he said.

Shamso Ali, another witness, described "smoke and chaos along the road, the blast was very heavy".

"Thanks to God I was a distance away but I saw the smoke and several vehicles caught on fire," he said.

Mogadishu is regularly hit by attacks by the Shabaab, which has fought for more than a decade to topple the Somali government.

The powerful blast comes after the Shabaab claimed a car bombing in Mogadishu on December 28 that killed 81 people. 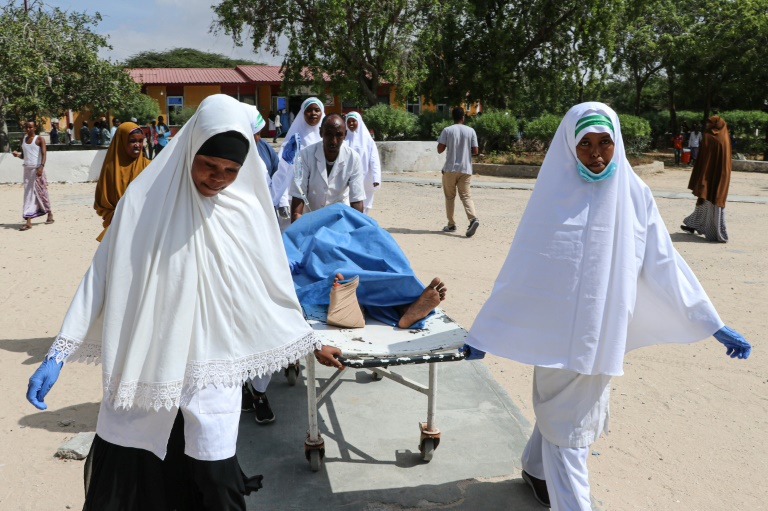 Over 10 people were injured in the blast according to police.

That attack, which hit a busy checkpoint in the southwest of the city, was Somalia's deadliest assault in two years. Scores were wounded.

The Shabaab has also managed to expand its network in the region, especially in Kenya which has suffered several devastating attacks in retaliation for sending troops into Somalia in 2011.

On Sunday, three US citizens died and several aircraft and military vehicles were destroyed when the Shabaab stormed a military base in Kenya's coastal Lamu region.

Also Sunday, just hours after the attack, police arrested three men who tried to force their way into a British military training camp in the central Kenyan town of Nanyuki.

The Al-Qaeda-linked group has in the past carried out bloody sieges against civilians in Kenya, such as the upmarket Westgate Mall in 2013 and Garissa University in 2015.

The uptick in attacks comes almost a year since the January 15 siege on an upscale Nairobi hotel which left 21 people dead.

In recent statements, the Shabaab has referred to an increase in US military air strikes under President Donald Trump, accusing Washington of killing innocent civilians.

AFRICOM said in April it had killed more than 800 people in 110 strikes in Somalia since April 2017.

No: It is the municipality's job to keep Knysna clean.