INTERNATIONAL NEWS - A Russian cosmonaut and two US astronauts arrived Friday at the International Space Station aboard a Russian Soyuz spacecraft, five months after the failed launch of a rocket carrying two of the passengers.

The rocket blasted off without incident from Russia's Baikonur cosmodrome in Kazakhstan and docked at the ISS less than six hours later, more than 400 kilometers (249 miles) above the Earth at 01:01 GMT, a few minutes ahead of schedule.

During a live broadcast via high-definition cameras aboard the ISS, the mission commander Ovchinin reported that the mooring mechanism was engaged. A NASA commentator then confirmed the "capture."

The liftoff was closely watched after the two men's space journey was cut short in October when a technical problem with their Soyuz rocket triggered a launch abort two minutes into the flight. 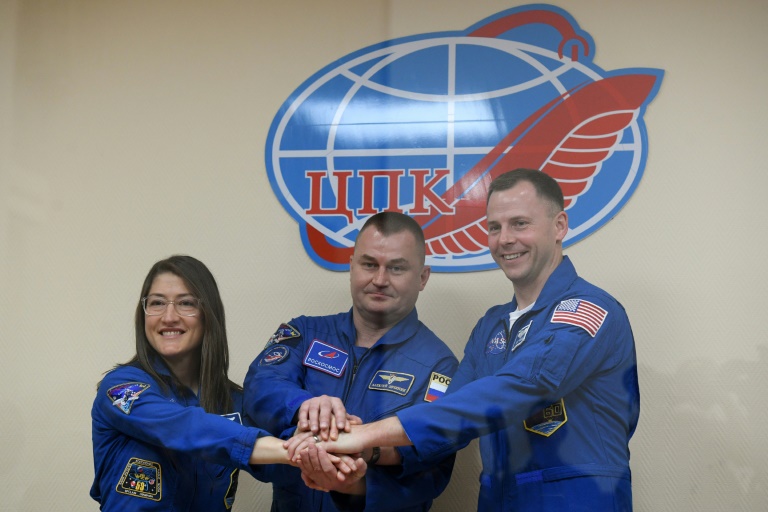 Russian cosmonaut Alexey Ovchinin's spacesuit was tested before the launch.

It was the first such accident in Russia's post-Soviet history and a major setback for its once proud space industry.

Speaking to reporters ahead of their six-month mission, Ovchinin said some faulty components in the launch vehicle had been found and replaced this week.

"Yesterday they found some minor malfunctions," the 47-year-old said on Wednesday.

He insisted that the launch vehicle was in good shape.

"There are no problems," Ovchinin said.

Hague, 43, said he was looking forward to the flight - his second attempt to get into space.

"I'm 100 percent confident in the rocket and the spaceship," he said.

The October abort was caused by a sensor damaged during the rocket's assembly.

Space expert Vadim Lukashevich said last-minute replacements were nothing out of the ordinary.

"The Soyuz is an old but reliable machine," he told AFP.

Russia's space industry has in recent years suffered a lot of mishaps including the loss of cargo spacecraft and numerous satellites.

Ovchinin, who spent six months at the ISS during a previous mission in 2016, has been keen to play down the drama of the October emergency landing.

The abort was "a little disappointing" after preparations that lasted a year-and-a-half but also "an interesting and needed experience" that tested the depth of the space programme's preparedness, he said.

Koch, Hague and Ovchinin's flight was being closely watched for another reason too.

SpaceX's successful test launch to the ISS of its Dragon vehicle has challenged an eight-year monopoly on travel to the space station enjoyed by Russia ever since NASA stopped launches of the Space Shuttle.

Speaking to reporters, the trio and their three-man backup crew stressed cooperation rather than competition following the Dragon mission, seen by some as the dawn of an era of commercial space travel driven by businessmen such as Elon Musk who owns SpaceX.

Koch, a 40-year-old space rookie, called the SpaceX success a "great example of what we've been doing for a very long time."

"And that is cooperating among partners and making things that are very difficult look easy," she said.

There had already been one successful manned launch to the ISS since the failed Soyuz mission.

The trio's arrival will return the orbiting laboratory's crew to six in all.

Oleg Kononenko of the Russian space agency Roscosmos, Anne McClain of NASA and David Saint-Jacques of the Canadian Space Agency blasted off to the orbiting outpost in December.

During their mission McClain, Saint-Jacques, Hague and Koch are set to perform the first spacewalks of their careers.

This week in a lighter moment Hague offered an insight into the specifics of personal grooming aboard the ISS.

"In space, we'll use clippers attached to a vacuum device so that the hair particles don't float around or get stuck in our vent systems," he wrote on Twitter.

The International Space Station - a rare area of cooperation between Moscow and Washington - has been orbiting the Earth at roughly 28,000 kilometres per hour since 1998.