'Vegetable seller' wants to go back to school 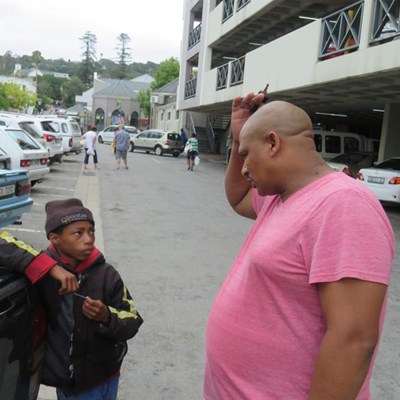 Enrico (left), the 14-year-old who ditched school to sell vegetables at the Knysna taxi rank is excited to go back to school with him is Sinethemba's Michael Smith. Photo: Nwabisa Pondoyi.
KNYSNA NEWS - As part of his crusade to get children off the streets, Michael Smith, director of Sinethemba youth development centre, has won a small battle towards defeating child labour.
One of the children spotted by the Knysna-Plett Herald, selling vegetables around the taxi rank last year, started going to the centre recently. He is showing great excitement at the possibility of attending school again.
One of the centre's quests is to fight against child labour. When the 14-year-old who only identified himself as Elrico Nel was interviewed by the newspaper on August 29, 2016 , he said he had dropped out of school and was working for the Rastafarians for R50 a day. According to legislation, it is illegal to employ children under 15 years old.
At the time, Smith, who has made it his life’s mission to keep children off the streets, was informed and undertook to encourage these children to not only go back to school but to inform them of the positive role the youth centre could play in their lives.
After many failed attempts to reach out to the children, Smith finally made a breakthrough on Friday, January 20 when Enrico made a surprise visit to the centre.
“Enrico has been going to the centre for three days now and I’ve also managed to meet up with his mother, which is a promising start,” Smith said on Monday, January 23.
He said she told him that the only thing standing between Enrico and going back to school was the fact that she cannot afford to buy school clothes and stationery. “The boy seems very eager to go back to school and we’ll try our best to make it possible for him to do so,” Smith said.
When he was interviewed for the paper last year, the 14-year-old Grade 6 dropout said, “Going to school is also work; the only difference is that you don’t get paid,” but he since seems to have had a change of heart when he told the paper on Monday, January 23 that he enjoyed going to Sinethemba and wanted to go back to school.
When Smith visited the school on January 26, he ascertained that Enrico is still registered at the school and can go back anytime, but in the meantime he is still attending Sinethemba.
Smith is appealing to the locals to help donate towards getting Enrico back to school. He needs a school uniform and stationery.
Smith can be reached on 072-055-6917.
Click here for previous articles: