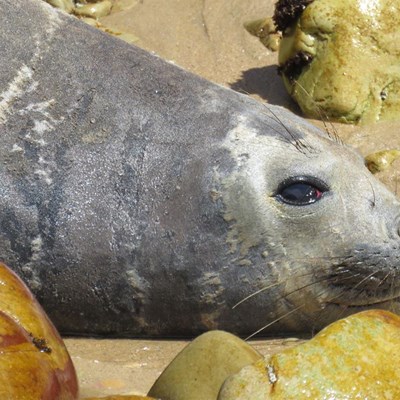 The seal as she was first captured by the Knysna-Plett Herald several days after she beached at Coney Glen, The Heads. Photo: Elaine King
KNYSNA NEWS - The elephant seal that came ashore at Coney Glen, Knysna Heads and was subsequently euthanased on January 23, has been dissected by marine scientists – and her death may have had to do with moulting, but findings are not conclusive.
Dr Greg Hofmeyr PhD, curator of the marine animal collection at the Port Elizabeth Museum at Bayworld, spoke to the Knysna-Plett Herald of his initial findings.
"As soon as we had learnt that an elephant seal had been euthanased, we made arrangements for the necropsy (an animal autopsy). We therefore came through to Knysna and did the dissection on January 24.
"We took as many samples as possible: her skeleton, her full pelt, a full suite of samples for pathological testing, the stomach with contents and various other samples for various studies. " said Hofmeyr.
In Hofmeyr's opinion the seal had come onto land to moult, but further analysis is yet to be done to confirm this.
Furthermore, according to SANParks, vets consulted by them maintain the animal was weak at the time of her being euthanased and that botulism or a disease of neurological origin would not have shown up in the postmortem.
The large animal's mass, estimated at 600kg, required a team of four working from noon on January 24 until 17:30 that day. The team included veterinarian Dr Isabel Calleata, a PhD student with the Cetacean Research Unit at Nelson Mandela University.
The seal was ashore at Coney Glen for about six days and was, during this time, monitored by SANParks after the public reported the sighting – and vets subsequently called when SANParks saw the animal getting weaker.
It was very sad for us all to see,” said SANParks communications manager Nandi Mgwadlamba, which is why vets were called in to have a look at the seal before she was subsequently euthanased, she said.
Mgwadlamba added that the seal had been lying there for a week being monitored by SANParks rangers daily. "The animal was strangely outside of her normal range and beached," said Mgwadlamba. "She appeared weak, in a poor state of health."
"Citizens were concerned about the seal's welfare as she looked ill. Our rangers went out to monitor her. We called credible experts and made a decision based on the welfare of the animal. It was strange she could have been moulting alone." Mgwadlamba also said that Bayworld reported a lump on the spleen and said, "A spleen provides the necessary resistance to fight bacterial infection."
She stated that Bayworld arrived 21 hours after the animal was euthanased. "Blood samples collected could have been close to a day old, but this also depends on what the samples were for," Mgwadlamba said.
According to the vets who assisted SANParks, the animal was weak and "at the time the best decision possible was made". The vets believe there are diseases, like botulism, or diseases of a neurological origin, that may have affected the seal and which would not show up on a postmortem.
However, in Hofmeyr's opinion, findings so far indicate that the animal was moulting.
"Elephant seals annually undertake what we call a 'catastrophic moult' and they do this on land because of physiological changes involved. It is perfectly normal for this process to take up to a month. During this time they mostly lie on the beach and sleep," said Hofmeyr.
"Gross pathological observations did not reveal anything substantially wrong with her," said Hofmeyr.
He said the seal had some parasites, which is normal, and a small lump on her spleen, which is unlikely to have posed a serious problem, but will be subject to histopathological (microscopic examination of tissue, to study manifestations of disease) analysis.
Hofmeyr put her age at between four and seven years, "which is not not old but rather middle-aged considering they usually live to anything between seven and 20 years", he said.
Her blubber layer also showed that she was not starving or needing food, said Hofmeyr.
Hotline when animals come ashoreWhile it is uncommon for elephant seals to come ashore on Garden Route beaches, at least one animal is sighted in most years, Hofmeyr said.
He urged anybody who finds a live seal, whale or dolphin ashore or in trouble, or a carcass of one of these animals, to phone the Bayworld Stranding Network on 071-724-2122 with as much detail as possible, and to forward a photo of the animal.
Mgwadlamba said people could also call the Department of Fisheries (Mossel Bay). Another option is to contact Dr Gwen Penry, Plettenberg Bay coordinator of the stranding network, on 072-817-7979.
Hofmeyr stated that the public must not interfere with a stranded animal, but should call the experts.